Anyone involved with youth sport will know of the huge amount of work that goes on in the background to keep clubs running, supply and maintain essential equipment and kit. 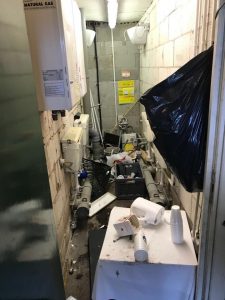 As they arrived in the car park they immediately saw that someone had smashed windows in the club house, somehow made holes in the roof and there was graffiti everywhere.  Metal sheeting had been ripped off the door.

They made their way into the building and said it was as if a pack of wild animals had been in there.  Equipment was ruined, goal posts and corner flags snapped, goal nets ripped, spare kits, cones and balls stolen.

As if this mindless vandalism wasn’t bad enough, paint had been thrown over the walls and filthy, racist graffiti daubed everywhere.  Electrical wires had been exposed and toilets/urinals kicked off the walls. 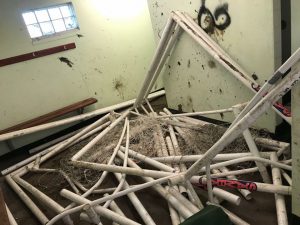 Why would anyone do this to a children’s football club? I cannot imagine how they felt to find this destruction.

Salford turned to twitter to share this mindless act, to try and find the culprits and they also set up a fund-raising page to attempt to raise sufficient funds to rebuild their club. Salford are adamant that they will not quit until they find out who was responsible for the damage to their football home.

As surprised and hurt as they were by the mindless violence and destruction of their club and equipment, they have been astonished by the amazing show of solidarity, generous donations and love from other clubs, members of the public from all over the world and the occasional celebrity. The response was incredible. 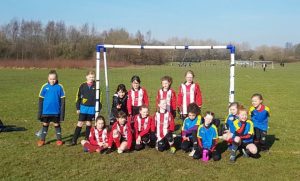 Under 11s Girls’ Manager Kirsty Jennings said: “We have been overwhelmed by kindness it just shows that there are more good people out there than bad.”

Salford United Junior FC makes an amazing contribution to the local community, they now have 16 teams from their U6s Wildcats (boys and girls) up to U14 girls team.  The club is run by countless volunteers and the children coached by fully qualified licensed FA coaches.  It will take them a while to recover from this setback but I am sure they will be even stronger after the moral support they have received.

If you would like to contribute to the crowdfunding page you can find it here.