England women defeated South Africa women by 8 runs in the final NatWest International Twenty20 at Edgbaston today to record a 3-0 series victory against the visitors. 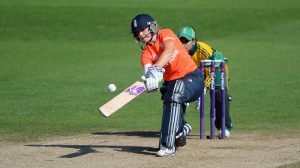 Following the close of play at Edgbaston, England women’s captain Charlotte Edwards was presented with the NatWest IT20 player of the series award for her run scoring exploits (141 runs) across the three matches.

Reflecting on England women’s international summer, Edwards said: “I’m absolutely delighted with how strongly we have come back from the disappointment of losing the Kia Women’s Test match at the start of August. To win our next five matches in a row, including a 3-0 whitewash against an up and coming South Africa side in this NatWest IT20 series, is testament to the strength of character and belief that runs throughout the squad.

“I personally have had a great few weeks with the bat and am feeling as good as I ever have done at the crease. It has also been really pleasing to see several of the other senior players deliver some strong performances under pressure. Jenny Gunn in particular has bowled brilliantly, Sarah Taylor has lived up to her own high standards behind the stumps, and it’s just great to see Katherine Brunt charging in with the new ball again.

“We now have a few months without any international cricket, before we fly out to New Zealand in February for the second round of our ICC Women’s Championship campaign. Before then, I will be heading to Australia in October with Heather Knight and Sarah Taylor to play state cricket in the Australian Women’s National Cricket League. The rest of the England women’s squad will resume training at the National Cricket Performance Centre (NCPC) in Loughborough throughout the winter in preparation for the New Zealand tour.”

England women will next be in action in February 2015 when they will travel to New Zealand to play a five match One-Day International series and three match International Twenty20 series against the White Ferns. The first three ODIs on February 11, 13 and 15 at the Bay Oval, Mount Maunganui, will form England’s second round of matches in the new ICC Women’s Championship.