It was a day with the biggest of stakes that was settled on the smallest of margins as Great Britain’s wheelchair curlers bowed out of PyeongChang 2018 after a set of roller-coaster matches at the Gangneung Curling Centre. 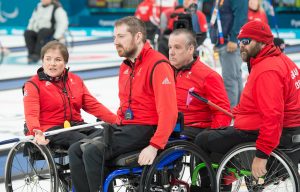 At the start of play the goal was clear for the team of Aileen Neilson, Hugh Nibloe, Gregor Ewan, Bob McPherson and Angie Malone: play two matches and win two matches.

That plan went off the rails after Britain met an excellent South Korean side. In an exhilarating back and forth battle that went down to the final stone a 5-4 victory eventually went to the hosts by a matter of centimetres.

That result opened up a whole array of permutations with Britain still harbouring hopes of a play-off place should Norway have lost to Slovakia.

It was a dream that very nearly became a reality with the Slovakians playing their way to a three-point lead before Norway fought back to force an extra end.

And, where centimetres decided their fate earlier in the day, it was millimetres that gifted Norway victory and a semi-final berth.

Britain did have the chance to end on a high with a final duel with China still to be played, however, China, who have been in imperious form all week, were too strong for Team Neilson and sealed a 9-3 win.

Aileen Neilson said: “We’re obviously extremely disappointed, we looked to be on that podium at the end of the week and we’re not, we didn’t win the matches that we set out to win.”

“We’re all gutted but we have to learn from it. We’ll go and have a bit of time off and then we’ll look at the competition, look at how we played and the schedule, we’ll look at our tactics and the dynamics and absolutely everything will be analysed.

“Our story is one of ups and downs, we’ve been in this position before and we’ve bounced back, we’re very resilient so we’ll learn from this and hopefully we’ll come back fighting stronger.”

Hugh Nibloe said: “It’s disappointing but we’ll learn from it. We’ve had some really good performances and we’ll take that with us, it’s not that we’ve thrown rubbish all week.

“We’ve played some really good stuff and now we want to build on that, we want to make sure those few good performances are more regular.

“Until the very last stone we had the belief, I tend to be a pessimistic person but I feel like I’m more of an optimist now

“Surrounded by these guys, with their experience, I’m constantly learning both on and off the ice.

“My hope is to stay healthy enough for the next four years and I can be back in Beijing, just across the water, that’s the ultimate aim for me.”