UEFA’s Together #WePlayStrong women’s football campaign has today released a documentary with FC Barcelona Femeni and Nigerian international Asisat Oshoala, as part of its Strong Is… documentary series, which follows the journey of some of the biggest names in women’s football to shine a light on the adversities they have faced and how football has played a key role in their lives. 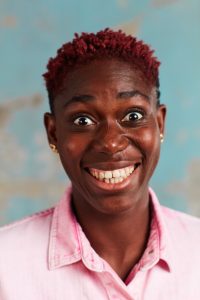 The episode is being released ahead of Barcelona’s crucial fixture against Atlético Madrid as the UEFA Women’s Champions League makes its long awaited comeback this Friday. Asisat was a key player in last year’s final after coming on in the 87th minute and scoring Barcelona’s only goal of the game – making history by becoming the first African to score in a UWCL final – and she is hoping to come back even stronger this year, score more goals and ultimately lift the trophy with Barcelona.

In the documentary (which is in partnership with Esprit), Asisat talks about how playing on the world stage of women’s football could quite easily have never happened. Growing up in an environment where girls weren’t involved in sport, Asisat felt she had to hide the fact she was playing football and kept it a secret from her family, which built a troubled relationship over time. She discusses the difficulty in having to make life-changing decisions without the support of her family at such a young age, with her only beacon of hope being her grandmother, who has sadly passed away.

It was only when she won the Golden Ball and Golden Boot, after she played in the FIFA U20’s Women’s World Cup in 2014, that she began to build a relationship again with her family, and has since claimed four African Women’s Footballer of the Year prizes, played in the 2019 FIFA Women’s World Cup and been part of top teams including Liverpool and Arsenal FC.

Asisat has also started her own foundation, the Asisat Oshoala Foundation, to help create opportunities for young girls to get involved in football.