Great Britain players have completed the 2nd World Deaf Tennis Championships with a tremendous haul of five medals across senior and junior events, including the gold medal in the junior mixed doubles on Saturday’s final afternoon of competition at Antalya Tennis Club in Turkey. 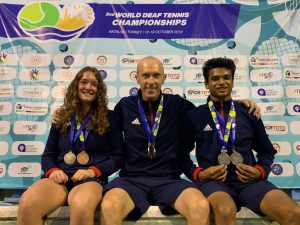 The four-strong squad, selected by the LTA, the governing body of tennis in Britain, won one gold medal, three silver medals and one bronze medal, with two of the silver medals coming in the senior men’s and mixed doubles.

Esah Hayat and Phoebe Suthers, who were crowned European junior mixed doubles champions in 2016, beat Czech second seeds Jaroslav Smedek and Katerina Blascikova 6-0, 6-7(6), (10-6) on Saturday afternoon to become World Champions and add to the boys’ singles silver and girls’ singles bronze medals they secured earlier on the last of the eight days of play.

Seventeen-year-old Hayat and 16-year-old Suthers, who were gold and bronze medallists, respectively, in their junior singles events at the 1st World Deaf Tennis Championships in Nottingham in 2015, end the latest championships with three medals apiece. They each partnered 34-year-old Lewis Fletcher to gain silver medals in the senior men’s doubles and mixed doubles finals on Friday’s penultimate day of competition.

“I’ve had a great week and am really pleased with getting two silvers and a gold. We have all come through some close battles this week and we’ve worked well as a team to get our medals. In my opinion, GB is becoming a stronger team on the world stage every year, and we will be working hard for more medals next year’s European Championships.”

In Friday’s mixed doubles final, Fletcher and Suthers looked to be on course for what would have been Great Britain’s first World Championships gold medal at senior level as they took a 5-2 lead in the deciding match tie-break against Urs Breitenberger and Heike Albrecht, but the German top seeds regained the momentum to take the gold medal 6-1, 4-6, (10-5).

Suthers, who led Anastasiia Lasitca by a set and 2-0 before the Russian had to retire injured from their girls’ singles bronze medal match, said:

“It’s been a brilliant trip, I’ve really enjoyed it and it feels so great to walk away with three World Championships medals. We managed to finish on a high with the gold medal and that caps so many amazing memories that have been made here in Turkey.”

Men’s doubles fourth seeds Fletcher and Hayat fought back from 5-2 down in the third and deciding set of Friday’s first final involving a British partnership, but ultimately German second seeds Breitenberger and Sebastian Schäffer held on to secure the gold medal 3-6, 6-1, 6-4.

“It was great being up on the podium with both my doubles partners and a proud moment to see the Great Britain flag flying high. Deep down, getting silver has only made me even more hungry to go in search of gold next time. We were so close in both finals. It always seems to come down to a couple of points. I would like to thank all the supporters back home, my teammates, our coach, Catherine (Fletcher) for her continuous support and devotion to deaf tennis – but, of course mainly as my wife. Also Andy Graham, our sports therapist and the LTA. Without them this week wouldn’t have been possible, nor would we have done so well.”

With the four-strong British squad having reached semi-finals in a total of six events in Antalya, the only medal not to come from those six events was in the women’s doubles, as Valerie Copenhagen and Suthers lived up to their fourth seeding. Copenhagen and Suthers slipped to a 6-1, 6-4 loss to French top seeds Marine Beney and Lucie Boulestreau in Saturday’s bronze medal play-off.

Copenhagen said: “We’re gutted to have lost out in the women’s doubles bronze play-off, but overall it’s been an amazing experience, with lots to take away for the future. I’m looking forward to upping my training and getting back to work on and off the court, ready for the next championships. Many thanks must go to our coaching and support team this week. Lots of memories have been made and there are many more to be made in the future.”

Courtesy of the LTA via MELT