The significant results came from the middle reaches of the table. Two away wins: Lightning beating Wasps with something to spare; and DMP Sharks returning home from Richmond with a well-earned victory to boost their confidence.

For the rest it was business as (almost) usual. Quins and Sarries laid their opposition to waste and Gloucester-Hartpury overcame Worcester with alarming ease. They now stand a creditable third, though they have faced only two tough opponents (Wasps and Quins) out of the five thus far.

This was Jo Yapps’ first turn as Warriors’ head coach, and to greet her two England stalwarts, Laura Keates and Lydia Thompson, returned to the fray. But their presence could do nothing to tip the balance. Mia Venner scored a hat-trick of tries on a rare appearance in the No 15 shirt for G-H. The remaining six tries were shared around, with Kelly Smith adding two more to her album. Yapp gave a measured response afterwards to the challenges facing her and her team. 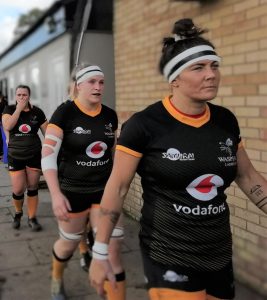 First up was Wasps against Loughborough Lightning. While one great No 8, Sarah Hunter was restored to the visitors’ strength, another one, Harriet Millar-Mills, was sadly missing in Amber-and-Black. Lightning took the initiative early on, sweeping down the slope towards the clubhouse by hand and by foot. Inside ten minutes Hunter had made her presence felt off the back of an attacking scrum, and more joy soon after as Liv Jones went over.

Wasps clawed their way back when a Lightning line-out was overthrown and caught on the full by Claudia Macdonald. She sprinted away to score untouched by human hand. Another remarkable solo effort by England newest scrum-half. (5-10).

Half-time came with a wider margin, 8-18, through a try by Amelia Harper, England’s U20 skipper, and Wasps needed a Plan B.

They seemed to have found it as Hannah West went over soon after the restart.

But from there on the scoring all went the wrong way for them. Harper added two more to complete her hat-trick, and the all-round mastery of the star leads, Daley-Mclean and Scarratt, ensured a comfortable victory that moves their side above Wasps into fourth place.

One moment of magic by Scarratt deserves mention. She had to chase back into midfield to retrieve a relieving kick out of Wasps’ defence. She scooped the wet ball up with one hand and was off, sprinting and swerving right up to Wasps’ 22. There she set up a clean ball for the attack to continue. Easy.

Down at the Stoop this was a rerun of the memorable game last year when Quins fought back from 7-26 down to draw 26-26. This time though they put the game to bed by half-time – a cool lead of 35-0. It was good to see Rachael Burford restored to fitness. 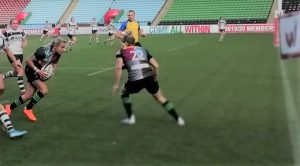 Inside the first quarter Heather Cowell went over twice to offer Kelly Smith some competition for the Top Try-Scorer Prize. In between Shaunagh Brown added another to her collection. Chloe Rollie can really enjoy herself playing behind such a glittering 14. She scored the first of her two tries – the second came very late on as a brave defence was finally turned.

It’s greatly to Bristol‘s credit that Quins, despite a huge advantage in power, managed only two tries during the whole of the remaining 40 minutes. The visitors, deprived of all their Welsh internationals and Amber Reed, still recovering from a hamstring injury, had to make do and mend. They tackled like fury, forcing Quins to increase their speed of thought and deed to add to their score.

Even when three Bears’ forwards were bowled over backwards in a set scrum and Quins opted for a repeat, rather than tap or go for the corner, the visitors stuck bravely to their guns.

But the final margin of 47 points shows the distance set between a decent mid-table club and the leaders.

Quins will win this year’s Tyrrells.

Now I’ve got that off my chest, I must guard against attacks from the flanks and rear. Of course Sarries remain a huge threat, but until the sisters Cleall reappear – Bryony watched the Wasps match with her leg still in a cast – they will have their work cut out to subdue Quins’ strength up front. And today Abbie Scott, Vickii Cornborough and Amy Cokayne were all missing. Out behind there are great performers on both sides, but again the suspicion is Quins have the greater firepower and reserve strength. Today Ellie Green out-performed Emily Scarratt in the place-kicking stakes by a furlong.

The third offering in the metropolis was a lower-geared show, but the result was another feather in the cap of the Sharks – do Sharks wear caps?) They came away from the late kick-off with a thoroughly deserved win by 21 points – a rare victory in London for them.

Beth Blacklock went through a gap just on half-time to give her side a welcome boost (5-14).

They weathered a strong attack by Richmond in the second half, to earn the reward of further tries at the other end. There. Lisa Thomson and Evie Tonkin both went over to ensure a happy coachload on the long trek north.

For the hosts this was a distinctly worrying result. After a heartening win 35-8 over the Warriors in Round 3, they lost last week to Glos-Pury (understandable), but this further loss will cause their new boss Mike Panoho some nocturnal disquiet. At least the Athletic Ground boasts the best skyline of all.

With less than a month to go before the international versus France, the Red Roses’ roll-call takes on added significance. Contracted players listed to play in Round 5:

*New kids off the block this season

If these lists remain unchanged – highly unlikely – then Simon Middleton will need to call in five uncontracted players.

Carys Williams is taking a break from rugby as she begins training for the RAF. We wish her every success.

While the absence of female officials from the current Tyrrells list is regrettable – not a single one present out of fifteen in Round 5 – it’s good to see Sara Cox appointed to another Championship match.