Manchester Thunder did just enough to see-off an organised Celtic Dragons in Cardiff. 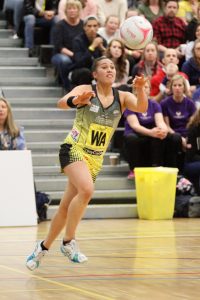 Dragons were the better team in the first half with Thunder flat and unimaginative in their play. But it was a different Thunder on show in the second half, with more urgency and creativity to their game.

Dragons were not giving up without a battle though and their home fans lifted them in the final quarter to claw back a five-goal Thunder lead.

But a timely airborne intercept from Black and Yellows captain Emma Dovey gave Thunder the turnover cushion they needed and they held off the Welsh outfit to sneak a 53-55 victory and avoid an upset.

Coach Karen Greig was relieved to come away with three points after a ‘frustrating’ game.

“We needed to trust our vision more in the first half and at times we became a little bit pedestrian,” she said. “We needed to put our foot on the gas earlier than we did.

“I’m saying the same things every week – the players know what they need to do and they are frustrated with their own performances.

“We came out well in the third quarter but then took our foot off the gas when we should have pushed on.

“We didn’t underestimate Dragons. It is always a tough place to come and you never come away feeling great. They put up a good performance but we managed to keep our composure at times where I felt some calls went against us.”

Greig made familiar changes to her side during the game, including bringing on Sophie Morgan at centre to inject some much-needed pace into the centre third and Amy Clinton joined the game in place of Joyce Mvula at shooter.

She added: “I felt like we needed a change and Amy has been pushing in the last few games. She has shown what she is capable of and we needed to mix it up in attack to give their defence something else to think about.

“Amy plays a different game to Joyce and she played the front position on the keeper well. Sophie has lots of speed and sitting Gabby back into that wing defence position, we just needed to tighten up on Bethan Dyke as she was their main ball carrier in that third.”

It was a timid start to this round 12 game once again from Thunder, as Dragons began with more intensity and desire.

A couple of early turnovers from the home side gave them confidence and Thunder were on the back foot.

They gradually grew into the game and gained momentum in attack while the defence was marking tight in an attempt to suffocate Dragons’ useful attack.

Keeper Kerry Almond produced some timely intercepts which boosted the Black and Yellows and they went into the first break 17-14 down with plenty of work to do.

Greig then brought on Sophie Morgan to inject some pace into Thunder’s centre court, switching Marshall to wing defence.

The changes paid off instantly with Thunder playing with swagger and confidence for the first time in the game. But Dragons were still plugging away with their own game plan and managed to keep Thunder at bay.

Morgan started to find space in attack and Marshall slotted into the defence, which continued to attempt to stifle Kalifa McCollin, who was the main feeder to shooter Roberts.

Joyce Mvula called for a time-out and Greig opted to bring on Amy Clinton, fresh from her solid cameo display last time out against Loughborough Lightning.

Clinton started confidently and looked right at home next to Kathryn Turner, who was again having a strong game at goal attack.

A period of dominant play was undone with some umpire calls that didn’t go Thunder’s way and they grew frustrated.

There were moments of brilliance as half time approached, with Leota’s dancing feet bamboozling the Dragons defence and her efforts were rewarded with a Turner-style long shot from Clinton.

But it wasn’t enough to force a lead and Dragons went into the break the happier side.

It took just two minutes into the third quarter for Thunder to take the lead for the first time in the game following a blistering phase of play. Thunder enjoyed their first real period of dominance in the match but it they failed to hold on to it.

The sides then traded turnovers and it revived Dragons who scored three on the trot and closed the gap, midway through the third.

Thunder had a 43-47 lead as we headed into the final period, but that soon evaporated as Dragons showed no mercy to their opposition’s hesitant play.

The Cardiff-based side then levelled the scores with five minutes to play.

Thunder started to feel the pressure but patient and mature play in the centre court from Morgan and Leota steadied the ship. It was a shame to see Clinton’s game cut short after she suffered an accidental blow to the face and with blood gushing from her nose, she was replaced with Mvula.

Seizing the initiative, captain Emma Dovey swooped in like a falcon and plucked the ball out of the air to regain possession and Thunder thanked her for her aerial antics by consolidating the turnover.

It relieved the pressure on for the visitors as they played out the final minutes calmly and a Turner score with 10 seconds on the clock secured a win and ensured Thunder survived a Superleague scare.