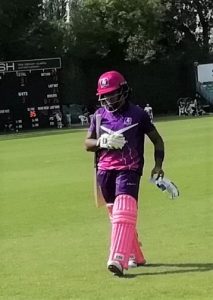 Lightning faltered at the half-way point with 75 runs on the board. Sri Lanka’s Chamari Atapattu (35); was clean-bowled by Bates (1-36). Six runs later, Vipers’ captain and England’s Tammy Beaumont juggled a ballooning catch to remove Georgia Adams (2) gifting fast bowling wannabe Izzy Wong (1-25) her maiden wicket. Captain Georgia Elwiss was promptly dropped by Tash Farrant but mustered up a six with the next ball.

During the 16th over, two overs after Lightning posted 100 runs, the game appeared to swing to-and-fro when Australia’s Amanda-Jade Wellington had Lightning floundering on a hat-trick ball at 125-2, then 125-3. Having had Captain Elwiss spooned to Paige Scholfield, Wellington (2-22) awarded a golden duck to former South African captain Mignon duPreez leg-before, first ball. SKY commentators found it hilarious that England team veteran Jenny Gunn should come to face Wellington’s hat-trick ball, wearing multiple track suits to defy the weather. Gunn survived and battled onto 12* partnering Jones, unbeaten on 74* out of Lightning’s 163-4. 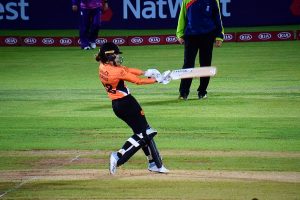 The target seemed a tall order for Vipers, knowing that had rain stopped play, Lightning would win using the Duckworth-Lewis-Stern calculation. Hard-hitting Danielle Wyatt (0) was caught at backward point by Kirstie Gordon, awarded a golden duck by Chamari Atapattu (at 1-1). Suzie Bates (20) was stumped by Jones, unwisely coming down the wicket to Gunn (at 23-2). Gunn also caught Tammy Beaumont in the deep (13) off Sarah Glenn (at 42-3). By then Vipers’ three most formidable batters were sat outside the pavilion wondering what happened.

When Amanda-Jade Wellington (15) reached double figures until bowled by Kirstie Gordon (2-18), Vipers were struggling to stay in the match – well behind at their half-way point (at 68-5). One silver lining was a cameo by Fi Morris – pictured left – who scored a record 36 runs at Vipers’ No.8, before being bowled by Chamari Atapattu (3-18). After the match, Tammy Beaumont was un-phased by defeat and looked forward to seeing Vipers’ batting back at full strength in Sunday’s semi-final.

You can view the full scorecard here.