Lougborough Lightning missed out on a place in the AJ Bell National Badminton League Championship Final for the first time in three year after defeat at the hands of Team Derby.

Facing their East Midlands rivals on home turf at Loughborough University, the side in purple fielded a young, untested team due to a number of injuries, which from the off made it an uphill task against a strong Derby outfit. In front of a 200 strong crowd, who did their utmost to get behind the Loughborough team, they eventually lost out 1-4. 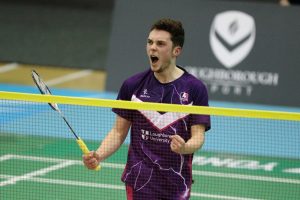 A late injury to talisman Henri Hurskainen meant David King got his first taste of NBL action, and the Loughborough University student acquitted himself superbly.

After losing the opener 5-9, an audacious through the legs winning shot helped the youngster fight back, taking the second game 9-4, and that gave him some serious positive energy. Despite losing the third 4-9, King composed himself to slaughter three time Olympian Scott Evans 9-2 in the fourth and take it to a tiebreak.

Opting for the Powerplay from the off, King won a tense rally before wrapping up a fantastic victory, falling to his knees as the home crowd went wild.

“I can’t believe it! I was so nervous going into the match as I haven’t played singles in quite a while now, and I only got the call up last night. He’s a very good opponent and it was such a fun game; I didn’t expect to win it but I just wanted to give it my best shot and it’s great to come away with the win.

“This is right up there with some of my best experiences on a badminton court. We have an amazing home crowd: I haven’t played in front of a crowd this big before and the support really kept me going.”

With captain Chloe Birch nursing a minor injury and only contesting the women’s doubles, it was Jordan Hart who stepped in to take on Lyddia Cheah Yi Yu in the opening event, the women’s singles.

The Welsh champion and her Malaysian rival got the evening off to the perfect start as their match went to five games. As passionate as they come on court, the Loughborough University student took the first game 9-8 but Cheah fought back 4-9. Trailing 7-8 and match point down in the third, Hart used her Powerplay to steal the game 9-8, much to the delight of the home crowd.

It wasn’t over there though, as the game took another turn and Cheah again pegged Hart back to take it to the decider. Using her Powerplay from the off, the Derby player went 0-2 ahead, before wrapping up the event 0-3 in the fifth.

Despite eventually losing out, Hart said: “I’m really chuffed with how I played and I thought I had the upper hand when I took the set with the Powerplay, but Lydia is very experienced and got on top of me to win the set after that. Unfortunately she won her Powerplay in the tiebreaker and managed to see it out.

“This is my first season getting off the bench and I’ve played the last three matches, so I’m absolutely buzzing to have played my part this season and hopefully I’ve shown that I’m good at this format and I can win games. Hopefully next season they’ll put me in the team again and I’ll get more opportunities to play.”

The third game of the night was the women’s doubles, featuring captain Birch and her fellow Loughborough student Viki Williams. The first game couldn’t have been tighter, however it followed the momentum on the night, the opposition taking it 8-9.

The ladies in purple were more than up for the fight though, as they took the second game 9-7, but a cruel Powerplay saw the visitors regain the lead thanks to an 8-9 third game. From their Derby pushed on, taking the fourth game 6-9 to lead the match night 3-0.

Viki Williams and another Lightning debutant Matt Clare took yet another event to a fifth game tiebreak, buoyed on by the feel good factor David King had created in the previous match. Despite ensuring the match went the full duration, they couldn’t quite secure victory, losing out 2-5.

With that Loughborough Lightning end the AJ Bell National Badminton League season in third place, a great achievement with such a young, home-grown squad.