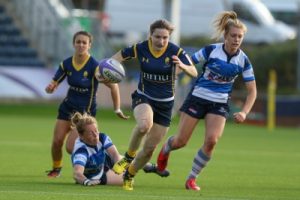 Heather Cowell scored a first-half hat-trick as Worcester Valkyries stormed to a 36-5 bonus-point win over Darlington Mowden Park Sharks in the Women’s Senior Cup at Sixways on Sunday.

Worcester took full control in the first-half as Cowell scored a treble along with scores for Lark Davies, Alexia Mavroudis and Samantha Bree as they went in 36-0 ahead at the break.

Valkyries couldn’t add to their score after the interval and it took Darlington till the very last minute of the match to get their first points on the board, as Lauren Taylor crashed over with the last action of the game.

Valkyries scored with their first attack of the match as Cowell found space out wide to dive over in the corner and Ceri Large added the extras.

Worcester looked to gain momentum with their early try and dominated possession and territory.

It didn’t take long for Davies to add Worcester’s second as the prop powered her way over after a well-orchestrated driving maul from a lineout.

Darlington failed to put a stamp on the game early on and made several mistakes as the Valkyries capitalised.

Mavroudis added a third for the hosts as the ball was recycled quickly and Large and Rachel Lund combined well before the Dutch winger went over.

Large added the conversion but just six minutes after scoring, Mavroudis received a yellow card for a high tackle.

However, this didn’t stop Worcester going further ahead as Cowell notched her second try after receiving the ball out wide.

Worcester then added a fifth following good work from Large, who dummied two passes to create space, and Bree then accelerated past the Darlington defence to score.

And Worcester had time for one more before the half-time whistle as Cowell rounded off her hat-trick with a superb run from the Darlington 22 to score in the corner.

In a fiery second-half, Sharks started to gain some momentum in attack and put Worcester under pressure.

However the home side stayed on top and Worcester were gifted an advantage as Taylor received a yellow card for a high tackle.

With a player advantage, Valkyries nearly scored another with substitute Alex Butterworth going a metre short but unfortunately dropping the ball in contact.

The game’s momentum swung both ways during the second period with both sides struggling to dominate both possession and territory.

Valkyries’ defence performed phenomenally stopping Sharks scoring on numerous occasions but their resilience was broken in the last play of the game as Taylor collected the ball out wide to score.

Valkyries are next in action against Aylesford Bulls Ladies at Sixways on Sunday 19 February in the Women’s Senior Cup.