Female athletes, organisations and individuals who have made a positive contribution to women’s sport will be recognised thanks to the #BeAGameChanger awards, launched today at Wembley Stadium by England footballer Kelly Smith MBE, England hockey captain Kate Richardson-Walsh MBE and Racing Driver Alice Powell. 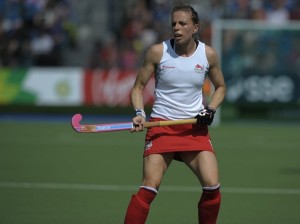 The Women’s Sport Trust #BeAGameChanger awards, supported by Microsoft, will take place on May 14 2015 on London’s South Bank in front of an audience including elite athletes, journalists, businesspeople, politicians, sports leaders and grassroots influencers.

The WST hopes that the awards will showcase women’s sport as an increasingly irresistible proposition by highlighting success stories, connecting decision makers with one another and raising the profile of inspiring role models.

Speaking at the launch event, England footballer Kelly Smith said: “It’s great to be launching the Awards at Wembley, especially after our game here against Germany last year which was a huge moment for women’s football in this country.

“It’s important to celebrate the achievements of women in all areas of sport, including athletes, journalists and everyone that works behind-the-scenes to raise the profile of women’s sport.”

Nominations are now open across seven award categories including sporting role model, sponsorship of the year and inspiring initiative.

Microsoft UK’s Human Resources Director, Theresa McHenry confirmed: “We are delighted to support the work of the Women’s Sport Trust and to be the headline sponsor for the #BeAGameChanger Awards. At Microsoft we are passionate about the development and support of female role models, and these Awards reflect the outstanding contributions of individuals and organisations to make a positive change.”

FA Director of the national game and women’s football, Kelly Simmons explained: “The FA is pleased to support the #BeAGameChanger Awards. It’s been an incredibly exciting year for women’s football in England with the Women’s Super League going from strength to strength and the national team attracting a record breaking crowd here at Wembley.

“The FA is committed to supporting women’s sport and the deserved recognition the awards will bring to athletes, leaders, journalists and organisations who continue to make a difference to the sporting landscape.”

You can nominate a game changer here.