Thunder weathered the Storm and held off a late surge from their London rivals to win a thrilling Superleague season opener. All the talk pre-game had been about that last-second Thunder win in last season’s final and this game did not disappoint.  Surrey were outplayed for large spells of the game and had no answer to Thunder’s fluid attacking play. But they kept their belief and clawed themselves back into contention, even after falling 10 goals behind.

It was a tense start and it stayed on centre in the opening exchanges, with both sides failing to capitalise on turnovers. Thunder edged an early lead and built up some useful momentum.  There were no signs of nerves from the defending champions as Aussie ANZ Championship import Chelsea Pitman, on her debut, lead the attack with aggression and skill. Her link up play with England shooter Housby flowed well and goal attack Kathryn Turner netted some solid long shots to keep the pressure on Surrey.

Unforced errors from both sides meant the game went several minutes without a goal.  England team-mates Sara Bayman and Surrey player-coach Tamsin Greenway were locked in a physical battle, which rubbed off on the rest of the players.

Pitman simply continued to improve as they game progressed, finding space where there wasn’t any, feeding to a waiting Housby who was continuing her form from last season. 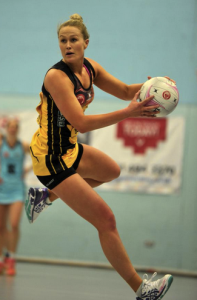 With Thunder at 26-19, keeper Kerry Almond produced an athletic block and Storm were growing frustrated.

The game lacked width at the start of the second half as Surrey struggled to get the ball to wingers Greenway and Amy Flanagan.  Thunder had no such trouble, with Pitman and Bayman spraying long passes into the shooters.

Bayman then inexplicably lobbed a hopeful pass to Pitman on the centre to gift possession to Storm, who dented Thunder’s lead by two.  Surrey seemed content to wait for a Thunder mistake, and the plan worked as keeper Josie Huckle leaped on a Turner rebound.

It lasted merely a minute. Almond forced yet another interception from a loose Pamela Cookey pass, who was playing her first game for Surrey since switching from Team Bath. A lucky line call for Surrey gave them hope and the score was now 43-37 and Storm ended the third the stronger side.  England captain Cookey, returning from a serious Achilles injury that ruled her out of Glasgow 2014, netted a couple of confidence-boosting shots on the buzzer. The pressure was starting to show in Thunder’s centre court play, with an otherwise solid Laura Malcolm launching a stray pass straight out of court.

But their young shooters remained composed with Housby, who finished the match with 92 per cent shooting accuracy, always hungry for the ball.  Almond was colossal in defence throughout and her partnership with Emma Dovey was one of the best they had produced in a black and yellow dress  As the clock ticked down, Thunder stayed patient in possession and in almost a carbon copy of the final seconds in Worcester, Bayman launched a long pass to Housby but this time it didn’t beat the buzzer.

Tracey Neville said post-match “I said before the game I wanted the performance over the win and luckily we got both.  I was very pleased with our defence tonight. Their three years working together is beginning to pay off.  Helen Housby is going to be the next Jo Harten. There are not many shooters that can turn to post like her.”

Chelsea Pitman, who won player of the match, said: “We’re disappointed we didn’t win by more, going 10 goals ahead and only winning by three is not what we wanted. But there there were loads of positives and I’m happy with the win and my debut.”