Wasps have unveiled an updated version of its logo as part of its move to bring all elements of the club under one banner. 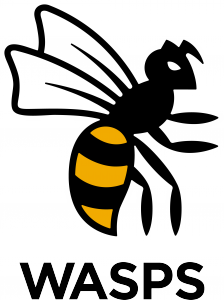 The men’s and women’s teams, netball team, and the academy, as well as Wasps FC, will all adopt the new visual identity.

The evolution of the Wasps’ crest pays homage to the club’s history while looking ahead to its future. The modernised, simplified design sees a return to the four-legged Wasp in recognition of the club’s original logo, while the rugby ball backdrop has been removed to show that Wasps is now much more than just a rugby club.

Wasps will be introducing the new logo across the club over the coming months, and it will feature on the new range of hummel training wear and playing kit.
Changes will also be implemented on the club’s digital channels, around Coventry Building Society Arena and at the new training centre in Henley-in-Arden.

As part of the rebrand, the Wasps Ladies team will now be known as Wasps Women to more closely align them with the men’s team and better reflect the landscape across women’s sport.

Amateur rugby club Wasps FC, which is based in Acton, West London, will also update its logo in line with the rest of the Wasps family of teams and clubs.

The Wasps Legends Charitable Foundation, who work extensively with the club and raise money for numerous charitable causes, will continue to operate under its existing crest.
Stephen Vaughan, Wasps Group Chief Executive, said: “We have made the decision to change our club crest following much consideration and believe the new logo better represents the entire club, our diverse stakeholders and the direction in which we are moving.

“This is a crucial step in modernising our brand and enables us to bring all elements of Wasps under one unified banner.

“The design has history and heritage at its heart but importantly looks ahead to the future of our men’s, women’s, academy, netball and amateur teams.

“The Wasp at the centre of the new design is forward facing, proud and bold – all values which symbolise the club.

“It’s important that we remember our roots and we are proud that Wasps FC will also change their logo in line with the wider club.

“We are very much one club and will always be ardent supporters of grassroots community rugby, and we look forward to continuing to work with them as members of the Wasps family.”