England dominated their last match to take a second successive Grand Slam. Italy made them work hard for their medals, but lacked match sharpness to hold them at bay. 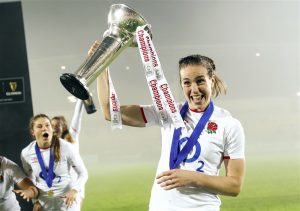 Ellie Kildunne made her presence felt within four minutes of kick-off. As the ball was moved right, she stabbed back inside to remind everyone of her attacking qualities. (0-7)

She was needed in deep defence as the Azzurre mounted a dangerous assault on their right flank, but this was to prove a rare moment of concern. For once a chip by Katy Daley-Mclean behind the Italian line didn’t bring its usual reward. Instead Marlie Packer, returning after a long absence, received a cut to the forehead and was replaced temporarily by Alex Matthews – another welcome return after even longer away.

Inside the first quarter Sarah Beckett drove for the line at the back of an attacking scrum, was held but had Poppy Cleall on hand to complete the job. (0-14)
Sarah Bern hoped she had scored another try off the back of a line-out, but the TMO and Aurélie Groizeleau agreed the ball had just nudged forward off Abbie Ward’s hands as she leapt.

But within two minutes the scoreboard ticked over again from a lovely move. Abby Dow found herself in midfield as the ball swung right; she fed Emily Scarratt who, as so often, found the ways parting in front of her as she cruised in to score by the posts.

This was her 47th try for her country, bringing her equal with Nolli Waterman’s total, but a good way short of Sue Day’s record of 61. Still, she has plenty of time. (0-21)

Next it was Amber Reed’s turn to cut through the Italian defences, but Claudia Macdonald couldn’t hang on to her pass as she hurtled over the line.
The pressure was beginning to tell on the hosts. Groizeleau had to have a chat with Manuela Furlan, but thank goodness, she didn’t find it necessary to show any cards through the game. Instead, another perfectly produced line-out left Ward claiming a fourth try. That was the bonus point assured. (0-28)

The Azzurre finished the half well, mounting assaults on the English line, but their lack of match practice showed as little handling errors undid the good work. A final thrust came to nought when the England captain snaffled the ball from their grasp as they looked to cross the line.

The third quarter remained scoreless, but Italy were racking up penalties almost as fast the tackles they had to make. Most of England’s progress was made close to the scrum and ruck; there were few passages of wide play to exploit the searing pace of the back-3 trio, Dow-Breach-Kildunne.

On 56 minutes Matthews and Amy Cokayne came on to make life harder for the hosts. Two minutes later Sarah Bern scored the try she’d been denied much earlier. (0-35) That was Scarratt’s fifth conversion out of five.

Simon Middleton made the bulk of his changes at the three-quarter mark. On came Helena Rowland for her debut at No 10, and the skipper was allowed her first rest of the series.

The new pack, with Detysha Harper, Shaunagh Brown and Harriet Millar-Mills on board, promptly drove the Italians rearwards to win a penalty. Ward opted for another scrum. These tactics paid handsomely, as they drained the opposition’s stamina faster than any alternative ploy.

With twelve minutes to go the ball chained right to Zoe Harrison who fed her chum Jess Breach to add her 23rd try in her fourteenth test. (0-40)

The only pity was that this was a rare example of the ball moving wide exploit the penetration of the outside backs in space. They had to make do with two tries on the night.

The extraordinary weather patterns of the series have almost been forgotten in the long painful saga of the pandemic. But the Clerk to the Weather was determined to have the last word.

Not satisfied with his hurricane force winds, sheeting rain (Dublin), snowstorms (Edinburgh) and heatwave (Pau!) of the first two rounds, he turned on his fog button for the last twelve minutes of Round Five in Parma. That might be the excuse for Leanne Riley’s try as she intercepted Sofia Stefan’s pass back from a line-out to stroll over the line. Did she disappear from everyone else’s view?

Then we had a repeat of the closing moments of last year’s encounter in Exeter, when the England No 7 chalked up her side’s half-century in the 81st minute. Only this time it wasn’t Vicky Fleetwood, it was Marlie Packer, newly restored to the strength after a long injury lay-off and motherhood. No doubting who that try was to be dedicated to.

Believe it or not

This was Italy’s first home game of the 2020 Six Nations, 280 days after the tournament started.

They came into the game on an unbeaten home streak of four games (W3, D1).

What an irony that England should be granted an almost unbroken run through this most disrupted of all Six Nations tournaments. Even Wales, the only other side to have completed four matches before the pandemic broke, have had their last fixture postponed a second time.

Katy Daley-Mclean came level with Tamara Taylor on 115 caps to be third equal.

Emily Scarratt entered the ‘nervous nineties’ of caps, though anyone spotting her looking nervous should claim some of the champagne.

Sarah Hunter has captained her country 71 times. Today she was minuting secretary.

Mo Hunt is the only 6 Nations player to be named as a coronavirus victim. The Scottish player (Round 2) and the French players (Round 5) have remained anonymous.

We hope all are (have been) restored quickly to full vigour.

The Red Roses adopted the shape of the cross of St George as they took a knee before the match.