A stunning second-half fightback saw Team Bath Netball turn a five-goal deficit into a six-goal winning margin as they beat Loughborough Lightning to secure a third-placed finish in the 2019 Vitality Superleague. 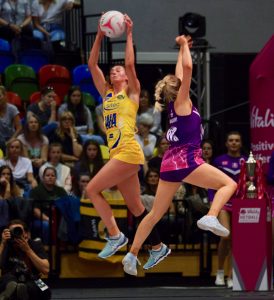 It was a fitting conclusion to an excellent season for the Sitec-sponsored Blue & Gold, who once again showed tremendous character allied with outstanding quality to record a thrilling 62-56 victory at London’s Copper Box Arena.

And there was more cause for celebration when goal attack Sophie Drakeford-Lewis was named as Vitality Superleague Young Player of the Year, while co-captain Serena Guthrie was selected at centre in the Superleague All-Star VII for 2019.

Team Bath Netball Superleague Head Coach Anna Stembridge said: “It was great to finish on a winning note and exactly what this group of players deserved for their efforts this season, Jess [Thirlby] and I are really proud of them.

“The players were obviously disappointed to have lost to Manchester Thunder in a semi-final that could have gone either way but they applied themselves brilliantly in training all week and really wanted that win. 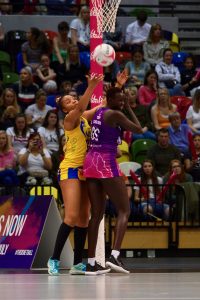 “They have shown real passion, grit and determination throughout the season and that ability and belief to come from behind to win has been a massive step forward compared to recent years. It was a fitting way to finish a very good season.”

Team Bath started with the same seven that had narrowly lost out to Thunder, who went on to claim the overall Superleague title with their own stunning comeback victory over Wasps in the Grand Final.

However, the Blue & Gold had to make an early change when co-captain Eboni Usoro-Brown, who was on a three-player shortlist for Vitality Player of the Year, picked up a knock and was replaced in defence by Welsh international Leila Thomas.

Lightning also lost their goal defence, Vicki Oyesola, to injury during a feisty and competitive first quarter that ended with Team Bath trailing 16-14.

That gap grew to 30-25 at half-time as Lightning got the better of the second quarter but Team Bath, with Thomas and the outstanding Summer Artman forging a solid combination in defence, chipped away at that lead throughout the third period and only trailed 44-43 going into the last 15 minutes of the season.

Three early goals saw Team Bath regain the lead for the first time since the opening quarter and provided the platform for them to finish the season with a flourish.

Guthrie and Player of the Match Imogen Allison – who was also shortlisted for the Superleague Young Player of the Year award – provided plenty of turnover ball and, along with the ever-influential Rachel Shaw, a constant stream of opportunities that Drakeford-Lewis and shooter Kim Commane clinically converted.

“At half-time we asked the players if they were sticking to the game plan and they weren’t,” said Stembridge. “They did so in the second half and what we saw was their ability to keep calm under pressure and be more clinical in attack.

“It was a very pleasing performance all round, particularly after losing Eboni’s influence so early in the game. Leila came in and did a brilliant job and Summer was just outstanding right from the off.

“Sophie and Kim have formed a formidable partnership, as have Imo and Serena, and Rachel was an unsung hero once again – you know she will deliver week in, week out and you come to expect it but her work in both attack and defence is remarkable.

“All of the squad have contributed this season and those bronze medals were well deserved.”

Supporters will have chance to train with the Blue & Gold stars on Saturday (May 25) when the end-of-season celebrations take place at the University of Bath Sports Training Village from 10am to 4pm.

There will be playing and training sessions throughout the day, ranging from Mini Netballers in Years 4-6 to Walking Netball for adults – all led by members of the Team Bath Superleague squad.

There will also be more ‘meet and greet’ opportunities, question and answer sessions and a chance to grab selfies and an autograph. Visit netball.teambath.com for further details.