This Scottish side showed three changes: Maxwell in at No 9; Bonar replacing the concussed Rachel Malcolm on the flank, and Howatt into the second row. 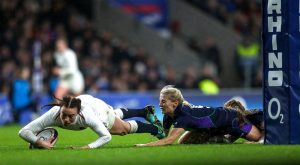 So now we know: the England management have a settled idea of the pecking order of their 35 contracted players. This was as full-blast a 23 as was reasonable. It showed five changes: Amy Cokayne returned after an injury made her unavailable for the Italy game. Both Mo Hunt (for Leanne Riley) and Vicky Fleetwood (for Marlie Packer) got their first start. The only exceptions made were to avoid excessive demands on individuals, hence Cath O’Donnell’s place on the bench. She had already played 304 of the completed 320 minutes of action.

The dozen contracted players not listed here (including several who are long-term injuries) will next have a chance to stake their claim on the yet-to-be-announced summer tour.

A prime target for the Red Roses was a second clean sheet. They leaked points in all the first three games, not many against Ireland and Wales, but still annoying. Against France they couldn’t maintain their first-half defensive wall right through to the end. France are a fine side, but four tries in the last 40 minutes wasn’t what the hosts or their supporters wanted. 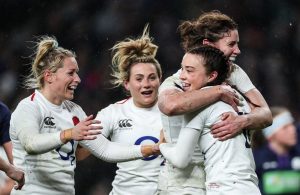 Anyone arriving at Twickenham in good time for this match could be forgiven for thinking they’d accidentally slipped into the local cemetery. Quieter than the church mouse.

31-0 had somehow become 31-38 in front of 82,000 stupefied spectators. Englishmen were fighting for their sanity and future contracts.

Would England’s women lose their rudder like the men as they sought their second Grand Slam since 2012? No, all bets were off.

Who predicted that they would win 80-0? Modesty forbids. The result that had been on the cards all the series came to pass under rain-clouds and floodlights –  twelve unanswered tries and nine conversions. 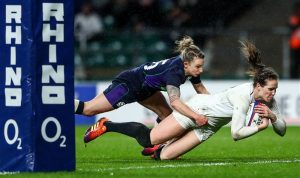 The blame tends to be levelled at the professional status that the winners enjoy. But that ignores the Scottish players who are under contract and the quality of the current English squad.

It’s as good as impossible to pick a player of the tournament from among them. Where do you start? In the front row, where the piano-shifters are transformed into players of virtuoso quality? In the second row, where Abbie Scott must be the greatest line-out exponent at work today, and Cath O’Donnell has sealed her place beside her with her non-stop activity? In the back row, where half-a-dozen players are lining up to compete for those three places in the next World Cup first-choice side? At half-back, where we have two outstanding performers at No 9 and a No 10 who commands every game she plays in? In the centre, where a player as influential as Rachael Burford has to fight for a starting position, so great in the competition? Or in the back three, where Sarah McKenna, Jess Breach and Kelly Smith have set new standards in pace, handling, footwork and finishing?

The pattern was set at the start of the contest. The Red Roses couldn’t match the men’s one-minute delay in scoring their first try against Scotland. It took Sarah Beckett all of three minutes to drive over the line. But at least her team didn’t then subside to an avalanche of tries against, as had happened an hour or two earlier. 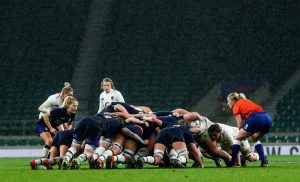 A view of a scrum (Photo: ©INPHO/James Crombie)

Five minutes in, Katy Daley-Mclean placed a kick through for Breach to ensure she’d score in each round of the series – a quite remarkable achievement. It mirrored Emily Scarratt’s kick through at Doncaster for Kelly Smith on the other wing. Not to be outdone, Scarratt later repeated her feat with another perfectly weighted chip. With it, Breach chalked up her ninth try of the tournament. In between Mo Hunt had posted her first try this year. So in 16 minutes England had amassed 26 points.

Smith had less ball come her way in this game, so she made sure she exploited a chance to slice in off her wing and score under the posts.

By now the forwards were thinking it must be their turn again; they hung on to the ball for Poppy Cleall to power over. 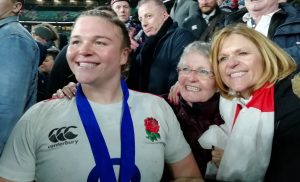 Scotland’s plight increased when Joy Neville showed a yellow card to the skipper, Lisa Thomson, for knocking an intercept on. This is one of the harsher penalties the Laws of the Game can mete out. Some think a penalty should be the worst that can befall the miscreant. Between her departure and the break Amy Cokayne was on the business end of a drive to the line.

Burford came on to replace Harrison in a centre pairing that you might consider the ideal partnership.

Scotland had been enjoying quite a bit of possession. The trouble was they could make so little of it. The forwards drove against the proverbial white brick wall; the backs, seeing much less of the ball, only rarely found a way to gain territory and keep it. The kick ahead was their best bet, but England’s counter-attacking powers have been one of many trump cards this year.

Sarah Bern was the first to get her name on the scoreboards after the turn-round. Her contributions run the risk of becoming commonplace: they have been inspiring. 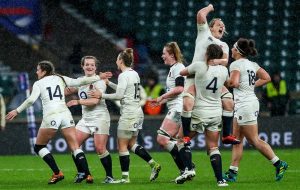 When Sarah Beckett, the young Player of the Match against Italy last week, was replaced by Marlie Packer, you saw the size of Scotland’s challenge. Sarah Hunter was the beneficiary of a Packer drive, to make the score 59-0.

When Emily Scarratt ran through a broken defence to get a deserved try, the Red Roses had equalled their final score of the equivalent match two years ago 64-0. And there were still 16 minutes to play.

In that time Cleall went over for her second, and O’Donnell got a deserved final touchdown wide on the right. By then, Daley-Mclean had been sent to the sin bin for not rolling away at the ruck. That at least evened up the yellow card-count.

Sadly for Scotland, it meant kicking duties were handed over to another promising kicker called Scarratt. She promptly nailed a magnificent conversion from wide right and was wreathed in smiles.

Player of the Match: Emily Scarratt

Attendance: 13, 278 was claimed, though goodness knows how this figure was reached.

That leaves two more matches to be played out a day later. Then we will be able to take stock of the way the 2019 Six Nations has played out.