Europe’s most famous footballing families are supporting a new TV advert by UEFA which calls on football fan dads to encourage their daughters to play the sport. 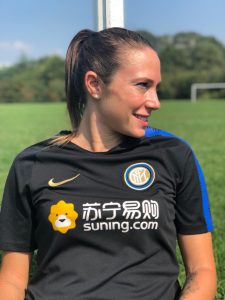 They are joined by the legendary Baresi family in Italy, with Internazionale assistant manager, Giuseppe, throwing his support behind the campaign alongside his daughter, Regina, who captains the Inter women’s team.

Former England striker Alan Shearer is another famous footballing dad – he has two daughters, Hollie and Chloe, and a son, Will – who is rallying behind the cause to encourage fathers to be more proactive in seeing football as an opportunity for daughters and sons, equally.

Former Norway internationalist Egil Østenstad and his daughter, Martine, who plays for Klepp Il in the Norwegian Toppserien, have also outlined their special family bond through football.

So too have Romania assistant manager, Adrian Mihalcea, and 67-times capped former Georgia internationalist, Alexander Iashvili. Both Adrian and Alexander have younger daughters whom they hope to inspire through football.

Sir Kenny Dalglish, Scotland’s most-capped player with 102 caps and one of the most decorated players and managers in British football history, said: “Football is in the blood and it has been a fabric of our lives as a family. Together, we have celebrated success and shared tragedy and throughout those experiences we have realised that football has a unique ability to unite families, clubs and communities.

“I’m a proud father and all my kids – Kelly, Paul, Lauren and Lynsey – have an affection and affinity for the game. We always encouraged it but, in truth, there was no real escape from it in our house.

“Kelly caught the football bug from a young age, mainly because her mum used to take her and Paul to the football when we didn’t have a babysitter in the early days in Liverpool.

“Kelly has made her name and reputation in her own right. Her children are now football fans and given the growth of women’s football – and the growing interest in football generally among girls and women – I’m sure girls will look at what she’s achieved and aspire to get involved, whether playing or broadcasting.

“Fathers can have a hugely positive impact on their daughters. I have always encouraged mine to follow their own path in life but growing-up in a football household has rubbed-off on all of them in different ways.”

Giuseppe Baresi played with distinction for more than 15 years with Internazionale and enjoyed a sibling rivalry in Milan with his younger brother and legendary AC Milan captain,  Franco. Luciano Spalleti’s assistant at the San Siro said: “I always loved passing on my passions to my children and Regina was really determined to play football. When they were young, we used to team-up, my son and I versus Regina and her mother and we would play football all the time.

“Regina was really competitive and she always wanted to win. The thought of her becoming a football player really made me proud.

“Having played football all my life, people would assume it’s normal that my kids would play it too. However, I would have supported any of their sports passions as long as they were happy. Though I must say that seeing my girl following my footsteps was something I really looked forward to.

“I believe that every father should encourage their little girls to follow their dream, especially if that dream is to become a football player. It is such a great sport, it teaches you team spirit and great organisational skills. Football is not only for boys, I have seen what it does to my daughter and the way she turned out, so keep supporting your girls, it’s worth it.”

Østenstad added: “I am delighted that I can use my knowledge and experience to help not only my daughter Martine in her playing career, but to maybe in a small way help girls overcome these challenges.”

The new TV advert comes as research from UEFA* reveals that there has been a 29 percent increase in the number of women playing football across Europe in the past year, and that those who consider women’s football’s image to be ‘cool’ has more than doubled. However much more can still be done to engage girls with the sport – and it all starts at home.

Noting the influential role dads can have in their children’s upbringing, UEFA is asking father figures to lead the way in driving the future participation of girls in football by sharing more sporting experiences with their daughters from a young age.

Peter Willems, UEFA Head of Marketing Activities and Sponsorship, said: “With more and more parents, and dads in particular, becoming increasingly enthusiastic about their daughters playing football, the time is now to build on this momentum. From kicking a ball in the garden to watching local games on the television, it all starts with dads and daughters spending quality time together through their growing love for the sport.”

As well as aiming to increase girls’ and women’s participation in the game, UEFA can reveal that interest in the sport is growing. The number of people watching women’s football on television across Europe has increased 11 percent in the lastyear, alongside a nine percent increase in those watching online.

Nadine Kessler, UEFA Head of Women’s Football, added: “We launched our Together #WePlayStrong image campaign over a year ago to help make football cool to teenage girls and to drive less drop out, more participation and increased investment in the game. Over five million teenage girls have engaged with our campaign so far as we strive to communicate the confidence, life skills and togetherness that can be gained from playing the sport.

“As much as this is a fantastic achievement, we endeavour to continue growing the women’s game – and we believe dads can play a crucial role in helping us do so. Together, we can create the next generation of the world’s top female players.”

For more information about UEFA Together #WePlayStrong, including how to find a local club near you, visit: weplaystrong.org

*Kantar Millward Brown carried out a national representative survey across ten European markets on behalf of UEFA in three waves in June 2017, November 2017 and June 2018.