Shona McCallin played her first capped international game since February 2018 as Great Britain’s women were beaten 3-2 by Japan in Hiroshima this morning.

Scotland’s Charlotte Watson also made her GB debut in a close encounter where the hosts came out on top. 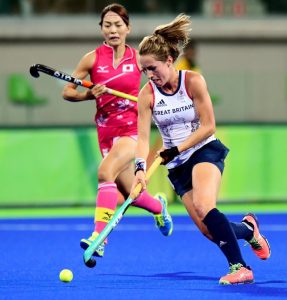 Japan took the lead in the second minute through Motomi Kawamura before Tess Howard equalised in the 14th minute, only for Minami Shimizu to restore her team’s lead less than a minute later.

Shimizu then scored again early in the second-half before Hannah Martin pulled a goal back with 11 minutes to play but Great Britain couldn’t find the equaliser.

Great Britain have been in Hiroshima since last Monday as part of a trip to experience playing in the extreme heat and humidity of Japan in the lead up to potentially featuring at the Tokyo 2020 Olympic Games.

They have already played two training games and will play two more this week before facing Japan in a second capped fixture at 2am BST on Saturday 20 July.

Today’s match was Rio 2016 champion McCallin’s first since suffering concussion in a test series away to Argentina last February before she also picked up a knee injury that prevented her from playing in the FIH Pro League.

Sarah Evans also returned to the matchday team having been ruled out of the final FIH Pro League game at Twickenham Stoop with injury, while 21-year-old Watson pulled on a GB shirt for the first time having already won 62 caps for Scotland, which includes playing at the 2018 Commonwealth Games.

For both the women’s and men’s teams there are two ways in which they can qualify for Tokyo 2020; if England win the EuroHockey Championships in August or if Great Britain win a two-legged Olympic qualifier at home at the end of October/start of November.

The Tokyo 2020 hockey tournament is scheduled to begin on Sat 25 July 2020, with men’s finals on Thursday 6 August and women’s a day later. Currently only hosts Japan have qualified for the men’s and women’s events.