British No.1 Lucy Shuker had a tournament to remember at Wimbledon but missed out on winning what would have been her first ever Grand Slam title. 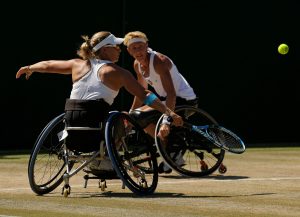 After successive straight sets semi-final defeats over the last four years in the Wimbledon doubles event, Shuker and Ellerbrock defied the odds to defeat Dutch second seeds Marjolein Buis and Aniek van Koot 3-6-4, 6-4 in this year’s semi-finals. That win saw Shuker playing some outstanding tennis, while her renowned attitude and determination was very much reflected in her partnership with Ellerbrock.

In the final, the duo pushed eventual champions and top seeds Diede de Groot and Yui Kamiji in the vast majority of games, something not reflected in the 6-1, 6-1 score line against a pair who are the world’s top two ranked singles players. 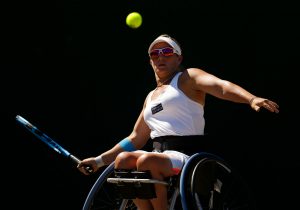 Speaking after the match, the British No.1 said “For me I’ve been longing to be in a final again for a long time at the Grand Slams, and to do it at Wimbledon is unreal. It’s humbling to be here and it’s an honour. I knew that it was going to be really tough playing against Yui and Diede because they are the number one seeds and they are very strong. Making the final was really great – it’s a shame we couldn’t get the win but they deserved it today”.

Shuker, who was injured in a motorcycle accident shortly after her 21 birthday, is the most physically impaired athlete among the world’s top 10 ranked women of a sport that she says has “transformed my life”, telling the BBC’s Claire Balding after the match, which was screened live on BBC2, “wheelchair tennis has given me the opportunity to realise so many dreams, it really is amazing”.st 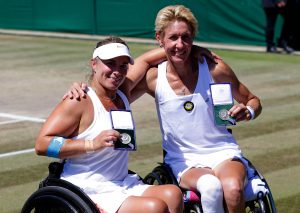 Buoyed after reaching her first Grand Slam final for five years, she is relishing the opportunity to once again challenge barriers and perceptions at next week’s British Open Wheelchair Tennis Championships in Nottingham. At that event the Britain will partner Dana Mathewson of the USA in the women’s doubles, as well as seeking success in the women’s singles. She returns to Nottingham on the back of winning the mixed doubles title at last year’s Super Series event.

Looking ahead to the event, Shuker said “It will be a totally different surface back on the hard court, which for me in singles will be a lot easier with the movement. Obviously we haven’t got long before we are competing, just one day so it will be tough. I think my tennis is going really well and I feel confident so I’m looking forward to it.’ 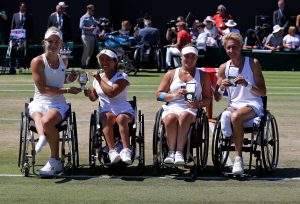 Shuker’s achievement in reaching her first Grand Slam final since the 2013 Australian Open was part of much wider Brit success at Wimbledon this year, with Alfie Hewett and Gordon Reid completing a hat-trick of Gentlemen’s Doubles titles. Meanwhile, Andy Lapthorne was on the winning side of the net in the first-ever quad doubles match to the be staged at Wimbledon after the Londoner partnered American David Wagner to an historic exhibition match win in the journey of a sport that is continually breaking new barriers.

All of the Wimbledon wheelchair tennis finalists will be among the world’s top players heading to Nottingham for the British Open. Since 1995 the tournament has had Super Series status, making it one of the sport’s six most important tournaments outside of the Grand Slams.

Tickets for the event at Nottingham Tennis Centre are being made available free of charge by the Tennis Foundation, with the tournament already set for a record crowd as the Nottingham public embrace the opportunity of seeing the Wimbledon stars in action.

The British Open takes place from from 17 – 22 July. – www.tennisfoundation.org.uk/BritishOpen

Courtesy of the Tennis Foundation