Wakefield Trinity Ladies remain unbeaten with 6 wins from 6 in the Women’s Championship, grinding out a steely 14-4 victory overs hosts Oulton Raidettes. The Round 6 clash was always going to be an close contest as the 1st and 2nd placed teams faced off at Raider Park. 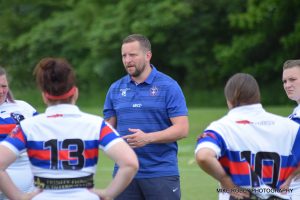 It was Wakefield who started the brighter in what would turn out to be 2 all important scores within the opening ten minutes. On the back of a quick defensive line Trinity managed to snuff out Oulton’s attacking threats and were rewarded with possession on their hosts line. Powerhouse prop forward Jordan Catling proved to be too much to handle close to the line merging her way over to open the afternoons account.

Possession in a similar position led to Trinity’s next try when hooker Kelsey Armistead darted over after several offloads opened a gap for the vice-captain. Lisa Taylor successfully added the extras to give Wakefield an important ten point buffer.

Wakefield looked to enhance their lead but resolute defense from Oulton contained their advances despite the strong running from Dani Swaine in at prop. Trinity’s pack lost some of it’s go forward when Jordan Catling who had to retire from the field after a clash of heads. 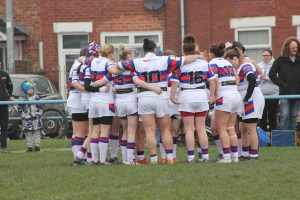 Just before the interval Oulton clawed back the deficit with an unconverted try when hooker Megan Beach was first to react from a rogue Trinity offload, Wakefield 10-4 up at the break.

As the league table suggested the teams were very closely matched and Wakefield worked hard to hold out Oulton and defend the first half lead. Trinity squandered several scoring opportunities and the game lay in the balance until Wakefield sealed the win with 10 minutes left to go. Winger Saskia Lewis crossed in corner after some slick handling from Gilmour and Reynard.

The conversion sailed wide and Trinity held on to the 10 point margin till the final whistle to register an all important win and extend 4 points clear of Leigh, Barrow and Oulton who are all level.

On keeping the 100% Championship win rate intact Head Coach Wayne Hirst said “We expected a tough game and Oulton didn’t disappoint I thought they were really good defensively. I was really pleased in how we started the game getting up in their faces and forcing errors which lead to those two important early tries.”

“We didn’t have a large bench and when Jordan (Catling) had to come off after a clash of heads we couldn’t replace that go forward. I thought Dani Swaine was really good in the middle today, she never stopped working and did some big minutes.”

“In the second half we had some opportunities to give ourselves some breathing room but we tried to overplay and we bombed a few chances.”

Wakefield are almost halfway through the season having only Barrow to see in the flesh, this weekend Trinity will travel to Hull FC who they beat at home in the first game of the season 40-10.

On the fixture Hirst said “I’m really pleased to be on the top of the table at this point of the season but we need to not fall in love with ourselves. Hull FC will be a different team to what we faced first up and they’ve picked up some wins since then, we need to prepare professionally for what will be a tough game.”