Wakefield Trinity Ladies kept their unbeaten start to the Women’s Championship intact with a convincing 36-6 round four victory over Leigh Miners Rangers. 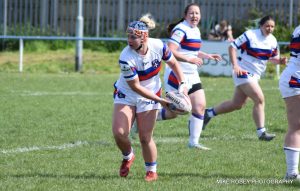 contain their capable visitors who entered the fixture with 2 league wins a comprehensive cup game the week before.

The required start came immediately from the kick off as a robust defence forced an error to give Trinity the field position to strike. Scrum half Georgia Cutt opened the scoring in what would be the first of a fine hat trick, stepping a rushing defender to cross the whitewash.

Wakefield pushed to increase their tally and on the back of more stern defence were able to probe from deep in their opposition’s half. Captain Beci Brierley sending Jessie Matthews on a barn storming run back on the inside, Trinity 8 points ahead in as many minutes.

Leigh started to compete more effectively and pressed the hosts line but a resolute line held firm. Trinity swiftly turned defence to attack, as the ball flowed through several hands on their own 10 metres, as winger Dani Rose broke down the touch side before drawing the fullback to put Georgia Cutt clear to race from halfway to touch down under the posts, Nicole Austin-Dyson adding the extras.

A sizable crowd enjoyed the scorching weather and red-hot rugby on display from the hosts as player of the match Yasmin Copeland crossed for the next score with an unstoppable drive under the posts from a quick play of the ball from Michala Reith.

Just before the halftime interval Leigh Miners Rangers reminded the hosts they were more than able to score points when danger woman, prop forward Detysha Quinn, was too much to handle close to the line, Leanne Johnson converting to reduce the deficit to 20-6 at the break.

Georgia Cutt completed her hat-trick of tries to open the second half, a sharp pass from acting half from Kelsey Armistead gave the scrum half the half yard of space to evade the Miners defender. Yasmin Copeland adding the testing conversion to give her side a 20 point lead going into the last half hour.

Trinity put the game out of doubt with the next try as Amy Brinkley’s kick found Copeland before the second rower passed back to Brinkley who jinked over after being help up on tackles before. Copeland again adding the extras.

Wakefield closed proceedings with Jessie Matthews who completed her brace of tries after hooker Armistead spotted a gap on the blindside and Matthew proved to powerful close to the line.

Head coach Wayne Hirst was impressed with his sides start to the game saying “We needed to set off with an intensity and we did that with 2 early scores. Leigh Miners are a good side and we knew we had to be on the money to get a win today.“

“I was really impressed with the effort from the whole team. The conditions we’re tough and the heat was energy sapping. We talked about doing all the little things right in defense, I think we controlled them really well. They are a big set and I think we slowed them down to make sure they didn’t get a roll on us.”

Hirst is happy to keep his unbeaten run going saying “We’ve done really well in the opening 4 games but there are still things we can work on. We’re learning about our strengths and weaknesses each game and we’re looking to improve week on week and I think the girls are doing that individually and more importantly as a team.

The game saw two Trinity debutants and Hirst was pleased with their first hit out saying “I was very impressed with Dani Swain, you can tell she’s got that experience and has been around the game for a while. I thought when she came on she ran really well, tackled ferociously and was good in contact. I think she’s going to be a good signing for us.”

“Shania Craven did well in her first open age game. She’s been training with us for 4 or 5 weeks now and has been really eager to play, she got her chance today and she did everything I asked of her.”

The Ladies take a break from action this week for the Magic Weekend and are without a league game until June 10th when they host Widnes Vikings at the Mobile Rocket Stadium. The next round of the Women’s Challenge Cup will be announced shortly.