The Wakefield Trinity Ladies team opened up their 2018 Women’s Championship campaign with a second half master class after taking a slender 2 point lead into the break against newly formed Hull FC Ladies. 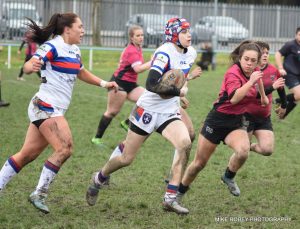 Despite the Trinity mens game kicking off an hour after the ladies down the road at Belle Vue a sizable crowd was in attendance for the Red White and Blue first 2018 showing. Without any pre-season friendlies head coach Wayne Hirst was keen to see how his charges would fair in their first competitive outing and it was the hosts who started the brightest.

16 year old full back Amy Brinkley in her first open age season with the club began what would turn out to be a star performance when she returned a kick 60 meters down field which set up position for the opening score. After a few quick plays around the ruck from hooker Kelsey Armistead it was loose forward Rebecca Brierley who was too much to handle close to the line. Nicole Austin Dyson adding the extras from just to the side of the posts. 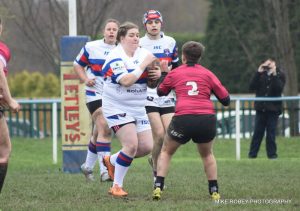 Trinity were able to extend their lead further on the 20 minute mark after some strong carries from winger Dani Rose lead to being camped on the Hull FC line. Recently introduced substitute Phillippa Lockhart managed to bulldozed her way under the posts with defender in tow. Austin-Dyson converted to try to put her side 12-0 up.

The visitors then enjoyed a purple patch when Trinity errors deep in their own half gave the Black and Whites several opportunities to score and influential scrum half Jenna Greening was held out on several occasions. On the half hour mark the line was eventually breached when winger Mia Duke took advantage of the overlap on the touch side to open her sides account. 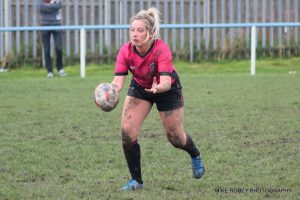 Minutes before the interval Hull FC reduced the deficit to just 2 points with converted score by hooker Tanya Hannam who spotted a gap at marker to crash over. Full back Leanne Baggley converted at the half time whistle to pull Wakefield’s lead back to a slender 2 points.

The introduction of Georgia Cutt and Yasmin Copeland from the bench at half time gave Wakefield a visible lift. Cutt operating at Scrumhalf proved to be handful running the ball and crossed for the first try of two for the afternoon, Austin Dyson improving the score. 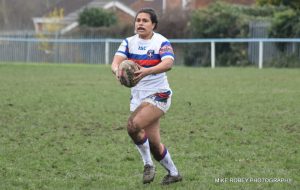 Second row Michala Reith was next on the scoresheet with a trademark barn storming run again Austin Dyson converting. Yasmin Copeland put the hosts into  more comfortable lead with the next score to lead 28-10 on the hour mark.

Wakefield finished the game strong adding another 3 unconverted scores, the first of which saw young prop forward Jordan Catling crossing on her debut before Cutt and Brierly closed the scoring with a try a piece to bag their respective braces. 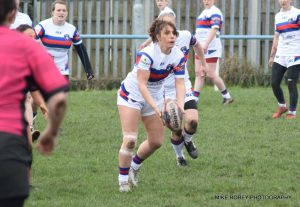 Following his first victory in the new head coach position Wayne first said “It went really well, to say it was our first game thats we’ve played competitively. I still think there’s lots for us to work on but on a whole we got the win which was the most important thing and I got to see how the girls react in a game environment.”

“In the first half we set off really well and then we went into ourselves a little bit. Hull started getting on top of us and really came back at us. We spoke at half time that we needed to move up on them quicker in defence, not give them as much time with the ball and cut their thinking time down. We quickened up our play of the balls to put them on the back foot and eventually we broke them down.”

Hirst was encouraged by the unexpected numbers in attendance saying “I was pleasantly surprised how many people came down and watched especially with the mens team kicking off not long after our game. There were over hundred people at the game and I’m sure the ladies appreciated the support.” 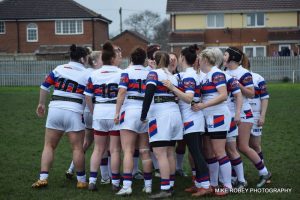 While center stage has been on the opening round of the newly formed Women’s Super League this week. Wakefield are using this season to build their squad towards the inclusion in the elite competition in 2019.

After the game Hirst announced that Rebecca Brierly who captained the side in this first fixture would take up the honor for the remainder of the 2018 season with new recruit Kelsea Armistead taking up the vice captaincy role.

Hirst said “We spoke in pre-season that I didn’t want to name the captain until we’d played a game, to see who was vocal and a leader on the field. I did have an idea in training who I thought would be an ideal candidate. I named Rebecca Brierley as our captain for the day and I thought she stepped up and performed really. I thought she led the team around and was very positive throughout the match so going forward Beci will be the Wakefield captain for the 2018 season.

Kelsey Armistead will be our vice captain, she’s our hooker she’s also a very good talker and she moves us around the field well.”

In round two of the Women’s Championship Wakefield will travel to long established outfit Wigan St Patricks on Sunday 22nd April 2pm Kick Off.

Head coach Hirst explained “We’re back in training Monday so its a quick turn around for the girls. We’re not going to do much heavy work with them I just want to go through a few things I picked up on from the game. We’ve another session Wednesday and I’ll be looking to go through some game plan for Sundays upcoming fixture at Wigan St Pats which were anticipating to be a tough match.”