England Lioness Jodie Taylor has been named as BT Sport’s Action Woman of the Year after her spectacular performance at the UEFA women’s Euro 2017 finals, where she won the Golden Boot with five goals. 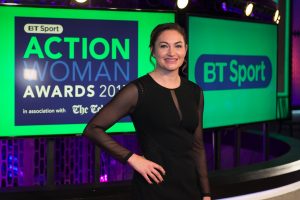 The Seattle Reign forward beat off competition from a shortlist of eight women, with exceptional sporting performances throughout the year, to win the public vote.

In what has been an outstanding year for women’s sport with inspirational individual and team performances, Jodie beat off competition from World Champion canoeist Mallory Franklin in second place and Jo Konta, the first British woman to reach the Wimbledon singles semi-finals since 1978, in third. Jo also reached a career-high ranking of world number four in 2017.

Jodie received her award from Rachel Atherton, the 2016 winner, at the awards ceremony at the BT Sport Studio, hosted by Clare Balding and broadcast live on BT Sport 2, BT Sport’s Facebook page and btsport.com. 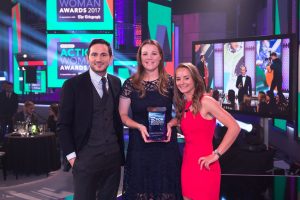 The England cricket team walked away with the Team of the Year award following their thrilling World Cup victory over India. Former England and Chelsea midfielder and BT Sport pundit Frank Lampard presented Anya Shrubsole, player-of-the-match in the final, with the award as the whole team capped a fine year with another trophy.

Judy Murray received the Lifetime Achievement Award in recognition for her commitment to tennis, and the impact and the inspiration she has given to so many others. Not only has Judy supported and helped two sons become Wimbledon champions and captained Great Britain’s Fed Cup team, Judy continues to work tirelessly to get more girls playing tennis, to get more women to take up coaching, and to increase female participation across all age groups. 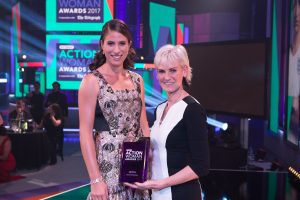 BT Sport presenter Clare Balding, said: “The BT Sport Action Woman Awards celebrate truly astounding women who have excelled with their sporting achievements over the past twelve months. It has been a breakthrough year for women’s sport – millions of people watching, greater investment and stunning performances. BT Sport is committed to celebrating the success of female athletes and our nominees this year prove that women’s sport is marching onwards and upwards.”