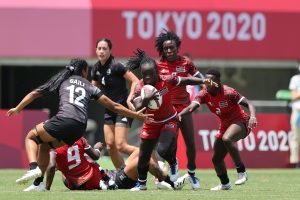 Rio 2016 medallists Australia, New Zealand and Canada each got off to a winning start as the women’s Olympic sevens tournament got under way at Tokyo 2020.

Great Britain, who finished fourth in Rio, were also victorious in the first session at Tokyo Stadium, while there were wins for France and the USA too.

Following the conclusion of the men’s competition the women’s rugby sevens tournament takes centre stage over the next three days at the Olympic Games Tokyo 2020, with the gold medal match set to take place on ‘Super Saturday’.

Following Fiji’s gold medal success in the men’s final on Wednesday, the opening match of the women’s competition saw Fiji take on France and Viniana Riwai scored the first try of the tournament to give the Fijiana a 5-0 lead, but France hit back before half-time, and it was captain Fanny Horta, earlier yellow carded, who scored a try to help edge her side back in front.

French speedster Séraphine Okemba took a lovely offload from Camille Grassineau early in the second half to put France 12-5 in front, and that is how the score would remain at full-time.

In the second match in Pool B, Canada opened their Tokyo 2020 campaign with an impressive 33-0 defeat of Brazil.

Charity Williams crossed for her second Olympic try, and first of Tokyo 2020, in the sixth minute, and after the half-time break the Canadians cut loose as Keyara Wardley (twice), Karen Paquin and Ghislaine Landry each crossed the whitewash.

Emma Tonegato scored the first hat-trick of the women’s tournament at Tokyo Stadium as defending champions Australia began their Pool C campaign with a 48-0 win against Japan.

Charlotte Caslick opened the scoring within 60 seconds before her fellow Rio 2016 gold medallist Tonegato scored twice and provided an assist for Demi Hayes as Australia built a 24-0 half-time lead.

Hayes scored her second try of the match shortly after the break, and Tonegato then grabbed her third — and 10th in the Olympics — while Maddison Levi displayed good pace to grab a late brace.

Earlier, Kristi Kirshe provided a match-winning impact from the bench in the opening match of Pool C as the USA came from behind to see off China 28-14.

Wang Wanyu scored the first try of the match, following a stunning break from Yang Feifei, in the third minute but the USA were level within 120 seconds as Kris Thomas raced over.

Kirshe entered the fray in the second half and two tries in as many minutes turned the tide in the USA’s favour, before Kayla Canett added a fourth for the Americans. There was still time for Chen Keyi to cross for China, but it was little more than consolation.

Great Britain had co-captain Abbie Brown to thank as they twice came from behind to win an enthralling Pool A opener against the Russian Olympic Committee team (ROC) 14-12.

ROC pressured their opponents from the kick-off and Baizat Khamidova profited to put her side 5-0 in front inside the first minute. Great Britain, though, led at half-time after Brown scored her first try.

Kristina Seredina appeared to have won the match for ROC when she raced through a gap in the British defence, but with time running out Brown found some room to cross the try line for a second time and win the match for Great Britain.

In the final match of the first session, New Zealand began their quest for a first Olympic sevens gold medal with a 29-7 win against Kenya.

Stacey Fluhler opened the scoring with less than a minute on the clock, before Michaela Blyde and Portia Woodman crossed the whitewash to give the Black Ferns Sevens a 17-0 lead.

Kenya cut the deficit amid enthusiastic celebrations as Christabel Lindo touched down under the posts on the stroke of half-time.

But, New Zealand made sure of victory in the second half as Gayle Broughton set Blyde up for a second score before notching a try of her own.

The second session of the women’s Olympic sevens tournament begins at 16:30 local time (GMT+9) when Canada take on Fiji.

New Zealand will be at 18:30 local time, when they take on Pool A rivals Great Britain in what should be a tight contest, after

Australia will be back on the Tokyo Stadium pitch when they take on China at 17:30 local time, before USA face host nation Japan at 18:00, which is followed by the highly anticipated clash between New Zealand v Great Britain at 18:30.