Winners of titles at this year’s Wimbledon, Australian, French and US Open tournaments will join Rio 2016 Paralympic gold-medallists in a star-studded line-up for the 2017 Bath Indoor Wheelchair Tennis Tournament.


The prestigious event is once again taking place at the University of Bath Sports Training Village following a hugely-successful debut last year, with spectators invited to watch world-class sport for free from November 14-18. 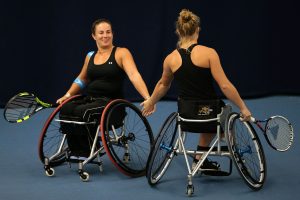 A stacked men’s singles competition will feature eight of the world’s top-ten ranked players including top seed Gustavo Fernandez of Argentina, the winner of this year’s Australian Open and British Open Wheelchair Tennis Championship. He reached the final in Bath last year but lost out on the trophy to Belgium’s Joachim Gerard, who is back to defend his crown.

Wimbledon champion Stefan Olsson, of Sweden, is also bidding for the title, while the British challenge will be led by Alfie Hewett – winner of the 2017 men’s singles at Roland Garros – and Rio 2016 gold-medallist Gordon Reid.

Top seed in the women’s singles is Diede de Groot of the Netherlands – she won the trophy in Bath 12 months ago and claimed the Wimbledon crown this year, as well as the US Open doubles title with Marjolein Buis of France.

Buis is one of six world top-ten ranked players in the women’s singles draw along with Britain’s Lucy Shuker, who partnered de Groot to the women’s doubles title in Bath last year.

Two-time Paralympian and Sports Performance graduate Louise Hunt will also return to her former University of Bath training base for the ITF-1 level competition on the UNIQLO Wheelchair Tennis Tour, organised by the Tennis Foundation.

In the quad competition, David Wagner of the United States will be bidding for his 11th title of 2017 but will have to overcome tough opposition from the likes of South Africa’s Lucas Sithole, Australian duo Dylan Alcott and Heath Davidson, and Britain’s Anthony Cotterill and James Shaw.

Barry Scollo, Director of Tennis at Team Bath, said: “We are delighted to once again be welcoming such world-class athletes to our outstanding indoor tennis facilities at the University of Bath.

“Last year’s competition served up a host of memorable matches and excellent performances and, looking at the quality of this year’s entry, I am certain we will be treated to more outstanding tennis from players at the pinnacle of their sport.

“Thank you to the Tennis Foundation for bringing this terrific tournament back to Bath for another year. Wheelchair tennis is such a great sport to watch, so I would encourage spectators to take this opportunity to come and enjoy some truly world-class sport for free.”

As well as watching, members of the public are also invited to try wheelchair tennis in a free session taking place from 11am-1pm on Saturday, November 18. It is open to all ages and abilities, all equipment will be provided and coaches will be on hand to give participants a helping hand.