Sixteen year old Harriet Lambe, has officially accepted a scholarship opportunity and will be joining forces in September with many other female students and footballers, at Bridgwater and Taunton College and Yeovil Town Ladies FC. 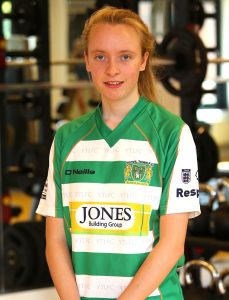 Lambe, who has captained the Republic of Ireland at international youth level, will begin studying at educational partners Bridgwater and Taunton College from September, along with being signed as an FA Women’s Super League female football player.

Her scholarship is fully funded and not only includes access to all of her academic hours and over 13 hours of football per week, but the full time programme also fully supports her full board accommodation and meals, as well as training kit, fees and transport.

A football scholar such as Lambe, will receive daily as well as twice daily sessions, to include technical, tactical, strength and conditioning, physio, analysis, nutrition, plus more! All day time sessions are based on the main site to the college, which already has 15,000 full and part time students attending, with additional club training also incorporated into her weekly schedule.

In the 2017 FA WSL Spring Series season, the average age of the Yeovil Town Ladies team was just 21.1 and in the last 3 seasons, 17 players have progressed from a development squad in to the first team and this is an ever growing trend.

This year will also see Lambe and her college team mates, play in the ECFA Category One Elite League (the highest division of college football in the whole of the country), which will give all female players the best opportunity to develop and reach their full potential. This highly commended college games programme, together with FA WSL and FA WSL Development Team football, will mean that Lambe will receive at least 30 games in a season, all to a high standard, along with elite proffesional coaching on a weekly basis, with the Yeovil Town Ladies FC philosophy fully engrained.

Harriet Lambe, who was at the Bristol Academy Centre of Excellence from U10’s, moved across to Southampton FC’s Regional Talent centre at U16 age level, but when she was just 13 years of age, got called up to her first Ireland camp with the U16’s. Since then, she has gone on to make further caps for her country.

Speaking about her scholarship Lambe said “Looking at my college options and also wanting to play football at the very highest level, I visited Bridgwater and Taunton College and Yeovil Town Ladies FC. I realised that this partnership gives me the best opportunity to develop as a player whilst studying for my chosen career in sport.

She went on to say, “Everyone at the college and club have made me feel very welcome. The facilities and their attention to detail on the course which I’m looking to study has been first class. I cant wait to join in September.”

Pictured above is Yeovil Town Ladies FC Sports Scientist Ewan Greenhill, who has been working with Harriet Lambe already, on her individualised pre-season training programme.

To find out more about the programme and how to get involved, email talent@yeoviltownladies.com