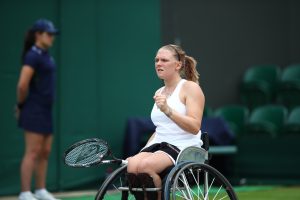 Whiley’s win caps a successful tournament for wheelchair tennis in this country following the Men’s Doubles victory by Alfie Hewett and Gordon Reid on Saturday, coupled with record courtside crowds and high-profile exposure for the sport on the BBC.

Whiley and Kamiji came back from a set down against the Dutch pair of Marjolein Buis and Diede de Groot to pull off an astonishing 2-6, 6-3, 6-0 victory.  The Dutch second seeds and Rio silver medallists took control of the first set and looked on their way to the title before the defending champions broke early in the second set and went on to level the match.

Whiley and Kamiji, who had not played together for a year after illness and injury had kept the Briton out of the sport, appeared to grow in confidence with every point.  They levelled the tie at a set apiece before some phenomenal tennis blew their opponents away in the decider to seal a famous win in front of yet another big crowd on Wimbledon’s Court No.3.

The win, Whiley’s 50th doubles title of her career, was the pair’s fourth Wimbledon Ladies’ Wheelchair Doubles title in a row.  It also saw Whiley reach legendary status within the sport as she equalled Peter Norfolk’s record for a Briton of 10 wheelchair tennis Grand Slam titles.

After lifting the trophy, Whiley said: “I can’t believe it, I really didn’t expect us to get through the semi-final, because I’ve been out for quite a while this year, so to actually win it today, it’s a dream. It makes it more special than the other three [Wimbledon titles].   “To be honest I was only thinking about winning a fourth Wimbledon title.  It’s only just dawned on me that I’ve won 10 Grand Slams now and equalled Pete Norfolk, so I’m really happy to make it into double figures.

“With it being live on the BBC I hope there will just become more and more supporters of wheelchair tennis and people wanting to play the sport.  Anyone interested should contact the Tennis Foundation to find out where they can play, and maybe get on a Tennis Foundation camp, as that’s where I started all those years ago.” 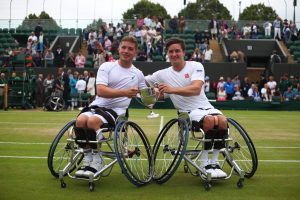 Alfie Hewett and Gordon Reid followed up their history-making achievement in 2016 to become the first Brits to retain the Wimbledon men’s doubles wheelchair tennis title.

In a thrilling contest, Hewett and Reid defeated Rio Paralympic gold medallists Stephane Houdet and Nicolas Peifer of France in a final set tie-break for the second successive year, completing a glorious 6-7(5) 7-5, 7-6(3) victory after two hours and 55 minutes of sporting theatre on Court No.3.

“When the match goes like that and you win 7-6 in the third it makes it even more special,” said an emotional Hewett. “The French had us in an absolute battle out there. There were never any easy points, which is what you expect against the Paralympic champions. We had to work for every single point.

“It’s amazing to have been on Court No.3. I don’t think wheelchair tennis has had that kind of coverage before and especially before the rain the stadium was absolutely packed out. When you get the coverage and the support like that and British winners, too, it hopefully makes more and more people want to get involved with the sport at all levels and engage with the Tennis Foundation’s expertise and resources to develop and promote the sport.

“A series of momentum shifts in the opening set saw Hewett and Reid reel off four games in succession for a 4-2 lead. Despite coming from 5-2 down in the eventual tie-break it was not quite enough and Houdet and Peifer snatched the lead.Rain forced the players off court at deuce in the second game of the second set, but Hewett and Reid came out firing on all cylinders on the resumption, taking a 4-0 lead before eventually forcing the decider.

Hewett and Reid went a break up midway through the final set and both Brits served for the match before top seeds Houdet and Peifer managed take the contest to another tie-break. However, Reid eventually forced the vital error with a drop shot and Peifer could not return the ball, giving the Brits back-to-to back Wimbledon titles.

“We were prepared for a hard match and that’s what we got, so it’s amazing to have retained the title,” said Rio Paralympic singles gold medallist Reid. “The crowd support out there all the way through was better than we could have hoped for. I just hope people will have seen the amazing standard of tennis out there and how much everyone here enjoyed it, as well as the people watching at home on TV, and that that can just continue to raise the profile of the sport and grow the sport as well, because it’s a fantastic sport.”

Geoff Newton, Executive Director of the Tennis Foundation, said: “This year’s Wimbledon Championships have not only delivered yet more Grand Slam silverware for the British players that are part of the Tennis Foundation’s World Class Performance Programme, but they have served as an incredible platform to showcase the sport of wheelchair tennis.

“I’d like to thank the All England Lawn Tennis Club for their role in helping to grow the sport so significantly over recent years.  To get such tremendous exposure on the BBC as well as having record numbers of people watching the finals on a show court can only help us in our aim to get more disabled people picking up a racket and realising tennis can be for them.

“We’d like to congratulate Jordanne, Alfie and Gordon on their success and thank them for what they do to inspire others.”

The Tennis Foundation is Great Britain’s leading tennis charity.  Its vision is to make tennis a sport which is inclusive and accessible to all, and works to open up tennis to its priority audiences of disabled people, young people in education and people in lower socio-economic communities – making it possible for them to enjoy the many health and social benefits of the sport whilst maximising their personal potential.