Leading investment platform and stockbroker services provider AJ Bell have extended their title sponsorship of the National Badminton League (NBL) for a further two years as the UK’s first ever professional badminton league expands for Season 3. 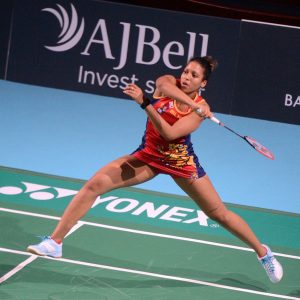 The renewed title sponsorship will see AJ Bell have a strong presence, including on and off court branding, at all 21 fixtures in the 2016/17 season played out between October and February 2017.

AJ Bell also enjoy naming rights to the league’s exciting ‘PowerPlay’ double points rally – an in-play feature exclusive to the AJ Bell NBL that has caught the imagination of supporters.

Since its launch in October 2014, the AJ Bell NBL has drawn a new audience into the Olympic sport. Over 1.1 million UK households have tuned in to watch the innovative ‘Power-9’ match-play format which includes time-outs, tie-breaks and a shortened scoring format with fixtures played over two hours.

Boosted by a bronze medal at Rio 2016 – Team GB’s first Olympic badminton medal in 12 years – English badminton is enjoying a significant rise in popularity and profile and AJ Bell have renewed their support to the sport as it continues to inspire a new generation of fans.

AJ Bell’s sponsorship extension comes on the eve of the 2016/17 season and marks the start of an exciting new phase for the league’s development.  Two new teams – Suffolk Saxons and Bristol Jets – have been added to the league with a new domestic TV broadcaster soon to be announced.

Adrian Christy, CEO of Badminton England, said: “After the brilliant bronze medal won by Chris Langridge and Marcus Ellis in Rio, the buzz around English badminton is at a 10-year high and having AJ Bell on board as proud title partners of the NBL only reinforces this.

“They have a fantastic pedigree in sponsoring high profile sporting events and I am delighted they continue to see the AJ Bell NBL as a wise investment.  Our plans to grow the league remain at the forefront of our thinking and I am pleased that AJ Bell will be beside us on that journey.”

Billy Mackay, Marketing Director of AJ Bell, says: “At AJ Bell we want more people to enjoy secure, healthy, long and rewarding lives. Through all of our sponsorship activity we aim to foster a mind-set where ‘looking after yourself’ means investing in both your health and your future wealth.

“Badminton is a great fit with that mantra. It is an exciting time for the NBL and English badminton as a whole and we are delighted we are able to continue to support the league.”

Since AJ Bell was founded in 1995 it has quickly grown to become one of the UK’s largest providers of online investment platforms and stockbroker services, offering low-cost SIPPs, ISAs, funds and shares to their 131,100 clients with assets under administration exceeding £28 billion.

You can find out more about the AJ Bell NBL here.