The Australian Diamonds were in imperious form this morning as they overcame the England Roses 66-46 to clinch a second successive victory in the Netball Quad Series. 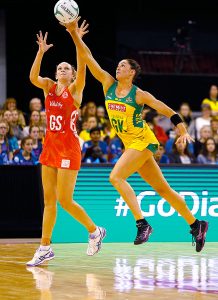 After falling to defeat against New Zealand on Saturday, it was a much improved performance from the Roses as they stayed close to their hosts, trailing by just six goals at the half-time interval.

However, Australia stole the momentum in the third quarter to pull away and take an unassailable advantage heading into the final fifteen minutes.

A sell-out crowd in Adelaide welcomed the teams onto court and England responded to the pressure with an impressive start.

Early turnovers from both sides made sure that the game remained close in the opening minutes. Serena Guthrie was linking well with the shooting combination of Jo Harten and Kadeen Corbin as the Roses stayed within touching distance of the world champions.

The Aussie attack of Caitlin Bassett and Nat Medhurst were also in ominous form as they seamlessly found the net in the opening quarter. They were ably supported by Madi Robinson who was providing wonderful feeds to the post for her shooters.

It was far from an impenetrable wall though as Stacey Francis showed by taking a flying intercept midway through the quarter. The ball was worked through court and Harten was able to finish the move from range.

The GS was starting to drop deeper towards the mid-court in order to link the attacking play and Harten’s movement freed up space in the circle for Corbin to keep the scores close.

A couple of unforced errors late on in the quarter allowed the Australian Diamonds to work the ball smoothly through court and Bassett was on hand to extend the lead to 19-14.

No changes were made for the second quarter and England started the quarter well once again with a Beth Cobden tip eventually leading to a Roses goal.

It was a fiercely competitive quarter with Francis and counterpart Sharni Layton trading intercepts. The pressure transferred onto the attack end and it was the Diamonds who fared better as they remained composed to score as England faltered slightly in the shooting circle.

The intensity continued to rise and the Roses were forcing the situation. More turnover ball was created and the momentum shifted to the visitors towards the end of the quarter as Corbin netted to pull England closer, 31-25 at half-time.

The starting seven continued at the start of third quarter and the Roses won the ball back immediately with pressure from Clarke forcing Australia to throw the ball away.

The resulting turnover was netted by Harten but that was to be the last sign of success in a quarter which was dominated by the Diamonds.

Intense pressure across the mid-court led to some inaccurate passing from England and the hosts ruthlessly capitalised when in possession. Bassett was regularly finding space under the post and her height was counting on rebound ball as she quickly pulled Australia 9 clear.

Worse was to come for England as Harten was briefly forced off with an injury after Layton clattered into her from behind, a stray knee to the back of a leg forcing the shooter to hit the floor.

Ellie Cardwell was introduced and calmly slotted home her first attempt. It was a forced change in tactic for England as Cardwell became a target for the long ball and Layton was quick to stamp her authority by cleverly reading the attempted feeds before athletically completing the steal.

It was a brief break for Harten as she returned to replace Corbin at GA but by this stage, England had fallen 15 goals behind.

The Roses were now chasing the game and the previously consistent passages of brilliance were now replaced with flashes of occasional brilliance.

England were now pressing hard across the court and the Diamonds were able to exploit the holes left to find their shooters and take a 51-33 lead with fifteen minutes to go.

Tracey Neville reverted back to her starting seven for the final quarter as England looked to end the game on a high.

With a sizable advantage, the hosts also made several changes with one eye on this weekend’s final Quad Series fixtures.

A number of early errors from the Roses led to more substitutions midway through the final quarter with Helen Housby entering the game at GA and Natalie Panagarry making her debut at C.

The fresh legs had the desired effect and England, led by some wonderful defensive work from Francis and majestic movement from Guthrie, matched their illustrious opponents for the remainder of the match.

At the final whistle it was a mixture of frustration and satisfaction. The Roses were certainly much better than they had shown against the Silver Ferns but the capitulation in the third quarter will give England much to work on.

A final fixture against South Africa lies in wait on Sunday morning as the Roses look to continue their improvement and secure a first victory at the Netball Quad Series.