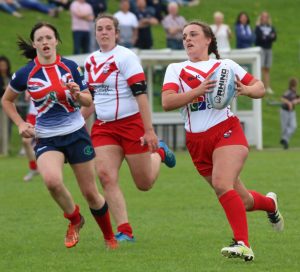 Great Britain Teachers picked up a steely 16-10 win over England Students as the 2016 Women’s Associations Cup got underway this weekend.

Amy Gilbert opened the scoring for the University and Colleges side on five minutes, Tara Stanley adding the goal, but Shona Hoyle struck back for the Teachers to make it 6-4 with 22 minutes played.

Just before half time, the Teachers hit the front as centre Stacey White got over, with Faye Gaskell converting to put her side 10-6 up at the break.

A hard-fought second period brought up no further change to the scoreboard, until Matilda Butler notched a four-pointer for the Students on 69 minutes to level the scores but, in dramatic fashion, Charlene Heneghan ran clear to strike a 74th-minute winner, with Gaskell adding the two to round off the scoring. 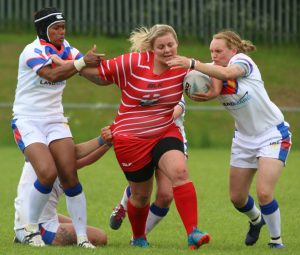 In the second game of the day, Sarah Dunn scored a 21-minute hat-trick as an impressive England Lionesses side romped to a stunning 62-0 win over the Great Britain Armed Forces.

Dunn set the tone with a try on two minutes, Jodie Cunningham converting.

She went on to complete her hat-trick either side of a Katie Coops try as England’s National Team led 28-0 after just 21 minutes.

The onslaught continued before the break with three more tries going the way of the Lionesses; Dawn Taylor, Kayleigh Bulman and Regan Walker all going over as England took a 38-0 lead into half time. 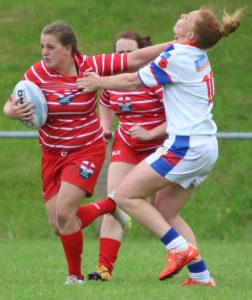 The break didn’t halt their momentum as Katie Hepworth strode over within a minute of the restart, as Amy Hardcastle’s try helped the dominant Lionesses to the half century.

The GB Armed Forces did restore some pride in the final quarter, but the damage was already done as four-pointers from Danielle Bound and Rhianon Marshall added extra gloss to the scoreline, as Coops finished the game with six goals to her name.

Report courtesy of the RFL