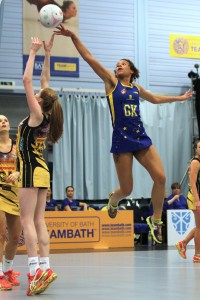 A sell-out crowd awaits Team Bath Netball for their first home match of the 2016 Vitality Superleague season – and England players Rachel Shaw and Eboni Beckford-Chambers are hoping to give the fans plenty to cheer.

Around 1,600 supporters will be at the University of Bath Sports Training Village on Friday to see Team Bath – backed by Carter Jonas – take on 2014 champions Manchester Thunder in a mouthwatering clash sponsored by The Royal High School, Bath (7.45pm).

Both teams have won their opening two matches, along with Hertfordshire Mavericks, and neither will want to give up their 100 per cent record without a fight.

It will also be the first opportunity for fans in the South West to see Team Bath’s new-look squad in action at the STV this year and Shaw is excited about what they could achieve.

“Something I love about this team is the way every player brings something different, something special and their own individual flare and passion to our squad,” said Shaw, who made her England comeback against Australia last month.

“The diversity of our 15 is a real strength but the key is the way we have managed to channel that into a sense of togetherness. I feel like I have played with some of them for years but have actually only known them for five months.

“That’s exciting and I can only thank my team-mates and coaches for creating a culture for us to grow so quickly in.”

Those words were echoed by Shaw’s club and international team-mate Beckford-Chambers, who has captained Team Bath to victories over Surrey Storm and Yorkshire Jets so far this season.

“To have two wins from two has given the squad great confidence in our quest for the Superleague championship,” said the influential defender.

“We are extremely excited to be hosting Manchester Thunder on our home turf. We know that it is going to be an exhilarating, hard-fought encounter but we are very much looking forward to the challenge.

“A big thank you must go out to all the fans, old and new, that have supported us so far in person or via Twitter, Instagram, Facebook or by tuning into Sky Sports. Your well wishes are heartfelt and appreciated by all the team.”

Joining the Team Bath squad for the rest of the season is University of Bath Sport Science student Nicole Humphrys. She replaces Jazz Scott, who has been forced to withdraw through injury.

Friday’s Superleague fixture will be preceded by a National Performance League (NPL) match between Team Bath and Thunder. It starts at 5.15pm and entry is free.

The Thunder match may be a sell-out but there are still tickets remaining for Team Bath’s other home Superleague fixtures, including the visit of Team Northumbria on Friday, February 19 (7.45pm).

Ticket-holders for that match will have access to an exclusive coaching masterclass from Team Bath Netball Head Coach Anna Stembridge and Director of Netball Jess Thirlby, taking place from 6-7pm.