The 2nd team at Richmond extended their lead at the top of the table on Sunday with an incredible victory over second placed Thurrock, winning 30-22. This was the seventh straight bonus point victory for the mighty 2s.

Thurrock who have enjoyed a dominating run of victories in the Championship South in recent years were defeated, when they visited the Athletic Ground, for the first time in the last few seasons. It was a tense, close 80 minutes of rugby with some superb plays from both sides.

Richmond knew they had to throw everything at this game if they were going to come out on top and they did so from the first whistle. They put the pressure on Thurrock and played territory, working their way deep into the opposition half. The pack asserted its authority once again, making life difficult for Thurrock to get on the front foot and clear their lines. After turning over a scrum, number 8 Sam McCarthy made a strong run, punching a hole in the defence. Richmond built the phases and earned a penalty. Prop Ellisha Dee on a crash ball then bulldozed her way over the line to open the scoring account for Richmond, taking an early 5-0 lead.

It was then Thurrock’s turn to unleash their attacks through the pace of winger Sally Tuson. Stealing a Richmond lineout put them in good field position and as Richmond’s defence was spread wide, Thurrock managed to slice through and score under the posts.

Richmond responded through a fantastic break from flanker Sam Voyle who handed off defenders left right and centre, but the support wasn’t quite quick enough to get there.

In a game littered with penalties at the break down, both sides remained fairly even until some quick thinking from scrum half Nicole Kwee on Thurrock’s try line resulted in another try for the 2s as she picked and pivoted her way over the line.

Thurrock finished the first half strongly with another try under the posts, but they failed to convert, keeping their lead to just two points. The score stood at 12-10 at half time. 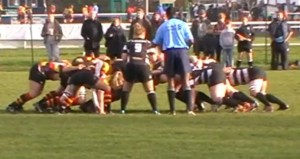 Fresh from the break, Richmond launched their attack again and caught Thurrock off guard. McCarthy made good ground again off the back of the scrum setting up Captain Libby Povey to sprint past multiple defenders to score.

The lead was short lived however when Claire Phelps read a pass off the back of a ruck and intercepted to then touch down for the try.

The teams showed why they were in the top two of the Championship table, playing some excellent rugby. Despite some sharp runs from the Richmond back three and smashing hits from the likes of Dee and Sammy Crandell, the scores remained as they were.

Richmond used their power in the scrums to build their attacking platform, as they drove the Thurrock pack who were unable to cope with the pressure in the front row.

Jayne Goodliffe cut a great line from through the midfield and used her strength to get over the line and put Richmond in the lead again.

In the latter stages of the half, the game got even more tense, as the lead swung between both teams, as they both tried to close the game out. A Thurrock infringement in front of the posts handed Richmond another three points as Richmond played tactically and opted for the kick to extend the lead and force Thurrock to get another try.

Richmond then suffered a blow as Dee was yellow carded for a high tackle. The scrum began to creak as a result putting pressure on Richmond to defend hard. It payed off as the T-birds were unable to find a way across the line, despite the best efforts of Tuson on the wing.

No sooner were the 10 minutes up for Dee, the T-birds number 10 was the next one to see yellow. Richmond were able to exploit the extra space on the field and in a nail biting last play, McCarthy picked and went again creating a platform for quick ball for Kwee to get the ball out to fly-half Tess Braunerova. Braunerova made a gliding run and backed her pace to run half the pitch to score the final try that sealed the win for Richmond, 30-22.

It was a fantastic performance from the 2s in front of a big home crowd and several players have certainly made a case for 1st team selection.

The second half of the season kicks off next Sunday away to Cheltenham Tigers Ladies.

Above photos show final conversion by Jayne Goodliffe after Tess Braunerova’s last try of the game.