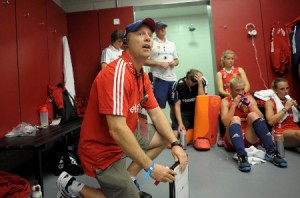 His team trailed to the World and Olympic Champions Netherlands, with just 15 minutes left on the clock. Inside the cauldron of noise at the Lee Valley Hockey and Tennis Centre, Danny Kerry appeared to be the calmest man in the arena as he delivered his team talk.

His players responded, clawing back the two-goal deficit and going on to win the title on shootout. The smallest of details both in the content of what he said and his body language made all the difference, something Kerry is acutely aware of:

“Over the last four years I’ve worked very hard on what I say verbally but also recognised that it is a very small part of what you communicate to the players. How you impart a message but also the hidden messages you give off are just as important.” he adds “You can’t really work at a high level without that passion but you have to be able to self regulate and make sure you’re giving the right messages. We were 2-0 down to the Olympic champions, but it was important to show I believed we could get back into the game both vocally and in my approach. I was very aware of not creating anxiety in the group. I was very pleased with the way the players and staff remained calm and got the job done.”

And get the job done they did. England had not won the European Championships since 1991, so after a number of near misses, the title was a terrific achievement for Kerry and his players.

Much of the coverage in the wake of their triumph used words like “character” “fight” “resilience” and “determination”. All of these are fantastic qualities for a team to display, but Kerry is keen to emphasise that they are not traits that happen by accident:

“Finding a way to win is what we work on in training every week. Even at 2-0 down in the 3rd quarter the conversation was about how there would still be opportunities. We changed a couple of things tactically and the game shifted towards us, I wasn’t pleased with the performance but I was pleased with the resilience and the way we capitalised on the momentum change.”

“In the training environment there is a lot of emphasis on the team self-organising and finding ways to win. We create different scenarios and then leave them to interpret them and find ways around them. It’s not just a habit it’s something we have really worked on. Going 12 matches in the Olympic qualifiers and the Euros unbeaten really helps the team to buy into what we do in training. That buy in is very important. We train very hard but if you don’t see the reward then the buy in can drop off. I think going into the year to Rio having the extra buy in is going to be a very positive thing.”

With Rio looming large on the horizon, Kerry and his players now go into one of the most crucial phases of their four-year cycle. The need to adapt and evolve as a coach is as important now as it has always been:

“Coaching is an incredibly complex activity. The context is always changing. Players get older, players get more experienced, new players come in old players go, you play different teams, it’s an ever-changing environment and you have to reflect that in the way you lead and coach the programme.” he continues “If you remain static then you will probably not be equipped to deal with the challenges you face. That applies at all levels. Working with young children, you may need to deliver the same messages but you have to find new and engaging ways to deliver it. You have to adapt and evolve to ensure you are delivering something engaging and effective in terms of learning. What that looks like to an elite athlete compared with a club player may differ, but the principles are the same.”

With the topic of the Olympics cropping up, the inevitable subject of legacy rears its head. His legacy as Head Coach is something Kerry visited during his interview for the role way back in 2004. His aim then, as it is now was to try to play his part in helping Great Britain’s Hockey players to become household names.

With the gold medal at the Euros, the team being nominated in the SportsWomen awards and the increased profile of players like Kate Richardson-Walsh, Alex Danson and Maddie Hinch, among others, it is fair to say Kerry has played his part in that. Not that you will see him resting on those laurels. Not while there are still medals to be won.

If you were inspired by Danny Kerry’s coaching exploits over the summer, why not have a look at the latest coaching offerings England Hockey has? Start your path to making better happier players now! Click here for all the details.