Newly-crowned World Junior Champion Francesca Summers will have another chance to test herself on the senior stage next week when she competes in the Modern Pentathlon European Championships at the University of Bath. 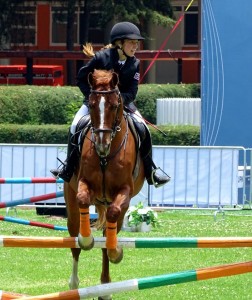 The 19-year-old warmed up for the Rio 2016 Olympic qualifying event in style by winning two golds at the World Junior Championships in Mexico City last week – the individual women’s title and the women’s relay with Mathematics student Eilidh Prise. She also won a silver medal at last year’s Youth Olympic Games in Nanjing, China and her outstanding form on the youth and junior circuits has been rewarded with a place in the Pentathlon GB senior squad.

Summers made her World Cup debut in March, finishing a highly-creditable 14th in Cairo, Egypt. She was 15th in Kecskemét, Hungary the following month and went on to gain more valuable experience at the senior World Championships in Berlin, Germany. Now she has been named in the four-strong British women’s squad for the European Championships, being staged at the Sports Training Village – the home of Pentathlon GB – from August 18-23.

“I feel I’m progressing all the time,” said Summers, who will be joined in the women’s individual competition by 2014 World Champion Samantha Murray, Kate French and Freyja Prentice – all University of Bath graduates. “I’m going to be competing with athletes who are a lot older and stronger but it’s going to be great being in the mix with them and seeing what I can do. Hopefully that’ll bring my standard up for future competitions.”

“These senior competitions are a big learning curve. They allow me to see how I need to adapt my training, how I have to adapt my competition strategy and how to be relaxed. There’s no pressure on me because I’m the youngest one there.”

Summers is hoping for plenty of home support for the British athletes next week and has not ruled out a shot at Rio 2016, with the Europeans doubling as a qualifying event for next summer’s Olympic Games.

“It’s going to be great having a home championships,” she said. “There will hopefully be so many British supporters, which will make it a bigger and better experience. I think there is a small chance of getting a place in the Rio team. In sport anything can happen. A lot can happen in one year. We’ll see!”

Tickets for the Modern Pentathlon European Championships start at just £6 for adults and £1 for under-18s. To purchase them or for more information, visit Pentathlon GB.