World Rugby has announced the shortlist for the prestigious Women’s Sevens Player of the Year 2015 award, with the winner set to be revealed at the World Rugby Awards dinner at Battersea Evolution, London, on 1 November.

World Rugby Chairman Bernard Lapasset said: “Women’s rugby sevens has seen amazing development in recent years and is one of the fastest growing team sports in the world. The Women’s Sevens World Series has gone from strength to strength since its inception in 2012 and the quality of rugby on show is seriously impressive.”

“These four players have been a vital part of that. They have shown the athleticism, skill, power, discipline and consistency required to excel at the highest level and they should all be congratulated, regardless of the judges’ final decision.”

“With sevens’ debut at the Olympic Games happening in Rio de Janeiro next year, these are exciting times for the sport and these players will no doubt all be striving for those elusive medals in 2016.”

The World Rugby Women’s Sevens Player of the Year 2015 will be selected by an independent awards panel, which includes a representative from each of the teams on the series, the World Rugby Sevens Referee Manager Paddy O’Brien and the television commentators from the series.

This is the third year of this particular award with previous winners being Emilee Cherry of Australia (2014) and New Zealand’s Kayla McAlister (2013).

You can find more details on the World Rugby Awards here. 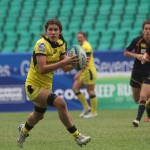 Charlotte Caslick (Australia)
The youngest of the four nominees having only turned 20 in March, Caslick is an integral part of an Australia side that reached four finals in 2014-15, winning the title in London. Shortlisted for the award last year as well, she is always to be found at the heart of Australia’s attack play with her pace, strength and vision. 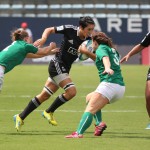 Sarah Goss (New Zealand)
A natural and inspirational leader who took over the captaincy this series, Goss led by example all season and never more so than in Dubai when her final-play try snatched the title from Australia’s grasp and set her side on course for four titles in a row in 2014-15. 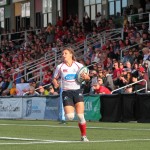 Nadezda Kudinova (Russia)
Russia’s impressive performance during the 2014-15 season was based in no small part around the exceptional efforts of Kudinova. The 23-year-old was a crucial cog in the team throughout the season, linking up Russia’s physical forward play with their speed out wide. With 149 points, she was among the top five points scorers on the series this season. 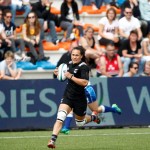 Portia Woodman (New Zealand)
The Kiwi flyer scored an incredible 52 tries in the series, the first woman and only fifth player in Sevens World Series history to pass a half century. A lethal finisher, her partnership with another former netballer in Kayla McAlister was at times simply too hot for opponents to handle.

You can see a video of the four nominees here.

All four players feature prominently in the 2014-15 series dream team.

The star-studded World Rugby Awards will take place at Battersea Evolution in London on 1 November, just a day after the Rugby World Cup 2015 final.

Now in their 14th year, this will be the first time the global rugby family has come together for a World Rugby Awards gala dinner since 2011 in New Zealand and the night will see 12 prestigious awards presented.

The awards recognise the top achievers in the game on and off the field at all levels and will include the crowning of the World Rugby Player, Team and Coach of the Year for 2015 with stars of women’s rugby and sevens also being honoured.