Surbiton capped a terrific domestic campaign with a 2-1 win over Canterbury in the Investec Women’s Hockey Championship final. In doing so they remained undefeated for the whole season. Goals from Julia King and Abi Robinson steered them to the title but they were pushed all the way by an excellent display from the Kent side. 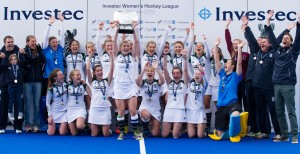 The first quarter was played at a terrific pace with both sides displaying their abundance of attacking talent. Sarah Page darted into the circle for the first clear chance but Helen Fagg in the Canterbury goal made a superb block. From the first penalty corner Fagg was called upon once again but she was up to the task and saved well. Surbiton didn’t have it all their own way and after some slick attacking play by Dirkie Chamberlain and Susannah Townsend, Lizzie Neal couldn’t quite connect cleanly allowing Abi Walker to make the save.

In the second quarter Surbiton took the lead. A penalty corner struck the player on the line and a penalty stroke was awarded. Julia King stepped up and found the roof of the net to make it 1-0. Five minutes later Canterbury were level thanks to a trademark Mel Clewlow strike which rattled the backboard at searing pace.

The third quarter was end to end as the teams grappled for control of the midfield. With 48 minutes on the clock Surbiton edged into the lead. A lovely move down the right was well finished off by Abi Robinson with a precise strike into the corner. King went close with a backhand strike that fizzed wide and then Jo Hunter teed up Jenna Woolven who was denied by an incredible stick save by Fagg.

The Canterbury goalkeeper was involved again in the final quarter making two excellent saves from Sarah Haycroft as the game began to open up. With time running out and Canterbury pressing for an equaliser the Kent side had their big chance to level it up. Clewlow’s incredible long pass out of defence put Eliza Brett in the clear but Walker made a superb save to deny the No8, allowing Surbiton to hang on for the win.

Haycroft was also full of praise for Player of the Match Julia King who scored two penalty strokes and also found the target in the shoot-out yesterday against Reading: “Canterbury came out hard, they fought us right until the end, and we had to dig deep. We were so keen to get the win for the second year in a row, and that’s what carried us through.”

Haycroft was also full of praise for Player of the Match Julia King: “She’s so composed and her technical ability is fantastic. We’ve got plenty of players like that in the team, our strength-in-depth is good and has helped us to come away as champions. We’ve got the cup final next weekend, and we always look to build on our last performance, so today was all about the culmination of a whole season undefeated. We’ll enjoy the celebration now and plan for next year – hopefully to do the treble!”