England Women recorded their best finish of the season in the Canada leg of the Sevens World Series on Sunday, defeating France 19-7 to take third place in Langford.

England needed to reach the semi-finals of the fourth leg of the series to keep alive their hopes of automatically qualifying Great Britain for next year’s Olympic Games and they did just that. 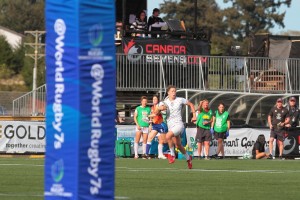 Day two started well for England with a quarter-final clash against Canada, who sit second in the World Series. Simon Middleton’s side made a good start, taking a 7-0 with an Emily Scarratt try, but Canada hit back in the second-half. England held them out though with Amy Wilson-Hardy crossing to take a 5-12 win.

Next-up, England faced reigning World Series champions New Zealand. The two sides met on day one in the pool stages with New Zealand taking a 12-24 win. It was a similar story in the final four with New Zealand running in four tries to England’s two to take a 24-14 victory.

That defeat pitted England against France in the third/fourth play-off match. With France above England in the series standing, this was a crucial match for Middleton’s side. And they made the most of it, taking control in the first half running in two tries. After the break they added one further score to make the final result England 19 France 7.

Middleton, whose side are now joint fifth with the USA in the series standings, said: “We are pleased that we have made some real progress in Canada in securing our best finish of the season, but we have still got a lot to work on. With two legs remaining we will be working incredibly hard to ensure we do everything we can to continue to move up the series standing in our bid to secure a top four finish and  Olympic qualification.”

London hosts the next round of the World Series with the matches being held at the Twickenham Stoop on May 15 & 16. The Final and the third/fourth place play-off match will be staged at Twickenham Stadium during the Marriott London Sevens. Day passes are available from www.quins.co.uk and dual venue pass from www.ticketmaster.co.uk