Great Britain claimed a series win against European rivals Spain as Head Coach Danny Kerry’s side finished with a 2-0 victory in their final match out in Valencia. The goals came in the third and fourth quarters as University of Birmingham’s Lily Owsley and East Grinstead’s Sophie Bray converted chances to seal the win.

Great Britain had the best of the chances in the first quarter, going close when Laura Unsworth’s near post deflection went agonisingly wide after a well-worked penalty corner routine. Despite continuing to dominate play in the second quarter, Spain’s defence stood strong and the sides went in goalless at half time.

Kerry’s side got their reward for persistence mid way through the third quarter as Lily Owsley found the target
with her first goal in a Great Britain shirt. The University of Birmingham forward made a strong run into the circle and turned quickly to fire off a shot on the reverse which blazed past the Spanish keeper to make it 1-0. 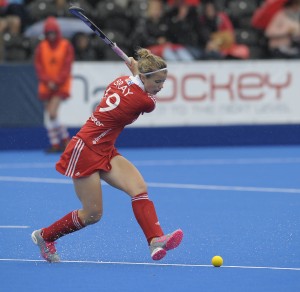 Sensing their second defeat of the week the hosts turned up the pressure in the closing stages, but goalkeeper Amy Gibson and Great Britain’s defence did well to keep out penalty corners and open play chances. With five minutes to go Sophie Bray celebrated with teammates after scoring her first GB goal with a simple tap in at the far post to give her side the victory.


Speaking after the game Great Britain Head Coach Danny Kerry said: “It wasn’t a pretty game, it was very feisty and physical and I was impressed with our resolve. Lily [Owsley] scored a well taken individual goal and Sophie [Bray] finished off a good team move at the back post.”

Reflecting on the series overall: “It’s great to only concede one goal across 180 minutes of hockey. Spain had very few chances against us and we generated good opportunities. I believe their world ranking of 15 doesn’t reflect their current status and think they will be a big threat in the summer when they are on home turf. Given the wide number of players we’ve used across these three matches I’m happy with the strength in depth we are creating and it’s been a really valuable trip for the whole squad.”

You can see Spain in action on home turf from 21-30 August as their men’s and women’s teams come to Lee Valley Hockey and Tennis Centre to contest the 2015 EuroHockey Championships.