Since England  won the first test, the hosts would have to win the second match by at least five goals to clinch the Series. Heading into the final quarter the result was still in the balance but a dominant finish saw the Silver Ferns come out on top.  New Zealand made two telling changes to their starting seven with accurate shooter Cathrine Latu coming in at GS and rookie defender Temalisi Fakahokotau taking the GK bib. Both contributed with impressive performances as New Zealand broke a seven game losing streak.

The tone was set from the first whistle as the opening centre-pass from Sara Bayman was intercepted by Jodi Brown. England had to wait until three minutes in to have an attempt on goal when Rachel Dunn brought the score back to 3-1.  It was a fierce start to the game with England captain Jade Clarke and Latu both taking flailing arms to the face, the latter having to be taken with a blood injury. An excellent turnover allowed Jo Harten to score from range to pull the scores to within one.

The attacking trio of Clarke, Dunn and Harten were combining well but the Ferns pressure in the mid-court was telling and they were able to regain the initiative to lead 14-11 after fifteen minutes. 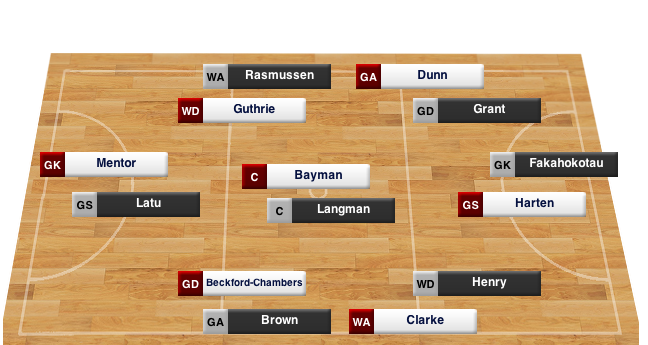 The advantage was instantly extended to five at the start of the second quarter as England once again lost possession from the opening centre-pass. Geva Mentor was responding with some fine defence of her own and a wonderful tip allowed England to convert a turnover and reduce the gap.  Moments later Katrina Grant was on hand to halt the visitors’ charge, reading the game superbly to deflect a Bayman feed into the circle. It was a tussle to get on top, displayed by the passion and determination of Serena Guthrie leaping through the air and taking a huge tumble while competing for the ball.

A fabulous long range Harten goal kept England in the game just before the interval, bringing the score to 26-21 at half-time.

As the third quarter got underway Kadeen Corbin was introduced at WA with Clarke switching to C. A better start saw England reduce the gap to two in double quick time. However, just as they were getting a foot hold into the match, the home defence began to assert.

It remained an even contest with New Zealand managing to hold onto the lead without pulling away. England were failing to capitalise on turnover ball as the Ferns sea of black in defence restricted passing options.

Stacey Francis replaced Eboni Beckford-Chambers following a time-out as the quarter came to a close. New Zealand had managed to narrowly win another fifteen minute passage of play to gradually extend the lead, 38-32 heading into the final quarter.

A contact call against Latu had England moving forward at the start of Q4 but having reduced the gap to four, a strong Harten pass slipped through the fingers of Corbin and the hosts were able to re-build the advantage.  A couple of mistakes forced by wonderful Ferns defence quickly saw the advantage grow, to the delight of an increasingly loud home support. Leana de Bruin was slotting in seamlessly to continue the hosts’ domination in defence.

New Zealand grew in confidence and England grew frustrated with the game moving out of their grasp. The Ferns were able to finish with a flourish and allow the score line to look more one-sided than the action would have indicated.  In truth though, the Silver Ferns were fully deserving of their win, a better attacking display coupled with their ruthless defending meant that they remained on top.

England will be pleased with their shooting display, Harten again looked like an enigma in the attack and Dunn scored 100% of her 16 attempts.

Next up in the Autumn Tour is the Fast5 tournament in Auckland which is to be played next weekend.