After seeing the Queen’s Baton Relay off on its journey around the world ahead of the Birmingham 2022 Commonwealth Games, England star Layla Guscoth has recommitted to Team Bath Netball for the new Vitality Superleague season. 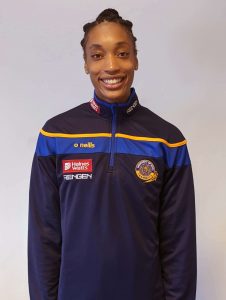 The doctor and defender, who is hoping to represent the Roses at next summer’s Games in her home city, was part of an official delegation at Birmingham Airport last Friday as the Baton – featuring a message to the Commonwealth from Her Majesty The Queen – departed for Cyprus, the first stop on an epic 14,000km relay across all 72 nations and territories of the Commonwealth.

While the Baton is making its journey around the world before returning to Birmingham in July for the opening ceremony, Guscoth will once again be taking to the court for the Haines Watts-sponsored Blue & Gold during the 2022 Superleague campaign.

“I’m really excited for the new season,” said Guscoth, who is in her second spell at Team Bath and is a doctor at the Royal United Hospitals Bath.

“I think 2021 was a great season for us and it was great to make the Final but hopefully we can go one better next year – and we get to do it in front of a home crowd, which will be really nice.”

Guscoth played an instrumental role as Team Bath reached their first Grand Final since 2013 and said: “I think we learned a lot from that. For quite a lot of the team it was their first experience in a final and that will build loads of confidence.

“I think for us this year it’s just tidying up on a few things we got exposed on towards the end of the season and building on partnerships. It’s definitely not about going back to the drawing board, it’s identifying the positives, of which there were loads last season, and refining the tactical things that will put us over the line.”

Guscoth also believes the return of fans to the Team Bath Arena for the 2022 season can help the Blue & Gold, who are also supported by Rengen, take that next step.

“I just can’t wait to experience the noise and excitement in the Team Bath Sports Training Village again,” said Guscoth, who spent two years playing in Australia before returning to Team Bath last season. “It was 2018 the last time I played here. Bath puts on a really good production and you really feel like you are playing at home. It helps carry you over the line.”

Guscoth is excited at the prospect of enjoying her ultimate home fixture next summer as England bid to defend their Commonwealth Games title in Birmingham, the city where she was born and raised.

“The Commonwealth Games being in England, and Birmingham even more so, is really amazing,” said Guscoth, who is part of the current Roses squad and helped them record a historic series victory in New Zealand last month.

“Netball showed in 2018 how great it is and England winning that gold medal really invigorated the sport in this country.I’m really excited to see what the competition on home soil, in my hometown, can do and how exciting it will be to broadcast great netball to the country.”

On being part of the official send-off for the Queen’s Baton Relay, Guscoth added: “This is such a surreal and proud moment for me as an athlete with strong Birmingham roots.There’s been so much buzz and excitement in the West Midlands and the start of the Relay has now brought all of this wonderful energy to life. The countdown has truly begun, and I can’t wait to see the Baton arrive back in Birmingham in 294 days’ time!”

Tickets for the 2022 Superleague season will go on sale later this month. Visit netball.teambath.com/tickets for more information.