After the Awards evening at the Spitfire Ground Kent’s women can look back on a highly successful season. They have gone on flourishing post-lockdown as they have done for decades. 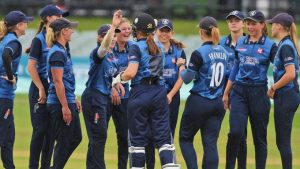 On a glorious day for celebration, the last of the season, the big crowd at Canterbury could celebrate not only another century by Dover-born Tammy Beaumont, but a parade of over 30 distinguished former Kent (and England) players who received their new Kent caps, each adorned with the number indicating the order in which they were capped.

Kate Brown, who represented Kent for over 30 years (!), had the honour of ringing the bell before play began.

It brought to an end another successful season for the Horses. (Worry not, this is the nickname they bestowed on themselves, after the White Horse of Kent). They won all but one of their completed matches in this calendar year

Kent women have gained a record number of titles.

The great names of that period are headed by Charlotte Edwards, Lydia Greenway and Laura Marsh. Lottie was honoured by having the new T20 Cup named after her. Lydia, now a familiar figure on Sky sports, was Head Coach of Kent women before setting up her own programme in 2017, Lydia Greenway’s Cricket for Girls. Laura (England 2006-2019) took 217 international wickets, a record for England spinners. She recently became assistant coach to Oval Invincibles who won the Hundred.

Welcome to a typical 2021 day of cricket. Your commentators are Rob Key (Kent) and Lydia Greenway (Kent). The umpires are Martin Saggers (Kent) and Nigel Llong (Kent). Captaining the home team is Tammy Beaumont (Kent). They are coached by Charlotte Edwards (Kent) assisted by Laura Marsh (Kent). Your scorer is Andy Zaltzman (Tonbridge School). Expert analysis will come from David Fulton (Kent).

The beer available at the many bars is Shepherd Neame’s very own Spitfire Ale. They are the main sponsors and own the oldest brewery in the town of breweries, Faversham.

This year, picking up after the Covid-restricted 2020 season, they won the Women’s London Championship, involving Essex, Hampshire, Middlesex, Surrey and Sussex. This was a replacement for the full County Championship which had to be put on hold.

The Horses, consisting mainly of youngsters of great promise, had a winning margin of 12 points. They also won the South East Group T20 Championship.

The best County players were then invited to play for the eight regional hub sides, set up last year as part of the big restructuring of English cricket.

Of the Kent squad an astonishing total of twelve were selected to join a franchise of The Hundred, the biggest event of the season. They were:

One of The Hundred’s greatest achievements was to advance the cause of little known players. One outstanding example was Kalea Moore, the 18-year-old off-spinning batter. She was called in to strengthen the Superchargers numbers when Australian stars were unable to make the trip. She seized her opportunity so well that the captain, Lauren Winfield-Hill, opted for her to open the bowling and, on one occasion, to bowl the death over too.

She excelled against Southern Brave, dismissing Danni Wyatt, caught by Kent team-mate Alice Davidson-Richards for 2, then clean bowling Stafanie Taylor, West Indies’ captain, for 0, to finish with 2-9 off 15 deliveries.

That moment won her the Play of the Competition, as voted by fans nationwide. Taylor was ranked No 1 in the world as a batter and as an all-rounder.

Grace Scrivens, the 17-year-old left-hand bat and off-spinner, was given the honour of captaining the county side for a match in late season. She was picked to play for England A team against New Zealand, where she scored 39 opening with the captain, Bryony Smith.

Some leading Stats this Season

And to finish, the results from the Awards Evening:

Congratulations to them all!