Jonnie Peacock paid tribute to Libby Clegg as she brought the curtain down on her Paralympic athletics career with a relay silver. 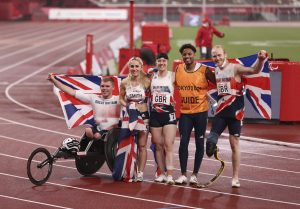 Peacock and Clegg joined forces with Ali Smith and Nathan Maguire as ParalympicsGB finished third in the universal 4x100m relay, a performance later upgraded after China were disqualified.

“To be a part of Libby’s last race and get a medal with her is just incredible,” said Peacock, a bronze medallist in the men’s 100m T64.

“She’s not talked about it but she’s run through so much pain at these Games and those were not easy legs for her. She gritted her teeth and got us a medal, I’m so proud.

“It’s a very different event and it showcases the best of everyone. It’s good fun to watch, not something you’d see at your average athletics meet and hopefully something you’ll see more of.”

“I’m so privileged and proud to be a part of this team and share this moment with these guys,” she said.

“Right now this is my proudest moment – being part of this team.

“I’m going to take some time out but this is my last running competition, unless I dabble in a sports day when my son is at primary school.

“To end my athletics career with this medal is a dream come true.”

“He’s 19, I’m 45. Age is but a number right? The thing with sport and Paralympic sport, it is not about classification, it is about legacy,” said Whitehead, the gold medallist from London and Rio.

“As well as a medal, it is about representing my country and setting an example for the next generation, guiding them through right and wrong and what Paralympic sport really means.”

“They were really tough conditions out there but we are all in the same boat,” said the four-time world champion.

“Even though I’m on the podium, it’s not where I want to be, I wanted the gold. But I have made the podium and I have to be proud of that. It’s been a long five years since Rio, but there is so much more to come which is the exciting thing.

“I’ll come away from this and go through the thought process and come back stronger, I’ll be ready to fight next year.”

Jo Butterfield threw a season’s best 21.77 metres but finished just outside the medals in the women’s club throw F51 in fourth.

Kadeena Cox, already a double gold medallist in cycling’s velodrome in Tokyo, set a season’s best 1:02.51 to qualify for the women’s 400m T38 final, where she’ll be joined by team-mate Smith on Saturday evening.