The 2019 World Rowing Championships doubled as the main qualification regatta for the Tokyo 2020 Olympic and Paralympic Games. This doubled the excitement and intensity as racing became much more than about medals. 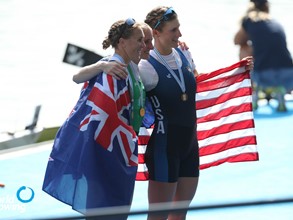 The Netherlands and Great Britain proved to be the most successful in Olympic qualification with both countries securing ten boat classes out of 14 for Tokyo 2020. Italy also did well with nine boats qualified, followed by Australia and the United States with eight qualified boats. Among the Paralympic boat classes the United States and Ukraine both secured spots in all four boat classes. Overall 20 countries qualified boats for the Olympic Games. There will be further Olympic qualification possibilities leading up to the Games in July 2020.

For New Zealand the gold medal success was dominated by the women with wins in the women’s eight, pair, double and lightweight double. It was also a first for New Zealand women’s rowing with Grace Prendergast and Kerri Gowler winning two gold medals each – in the pair and eight. They were not the only athletes to double up and medal twice. Australia’s Jessica Morrison and Annabelle McIntyre won silver – in the pair and eight.

The blue ribband women’s single sculls had the reigning World Champion Sanita Puspure of Ireland successfully defend her title ahead of Olympian Emma Twigg of New Zealand. In third was Kara Kohler of the United States. Kohler’s bronze medal was her first international medal since winning bronze at the 2012 Olympic Games.

The men’s single sculls ended in one of the closest finishes of the regatta. Germany’s Oliver Zeidler won his first World Championship title. In second Sverri Nielsen of Denmark picked up his first World Championship medal. Reigning World Champion, Kjetil Borch of Norway finished third. The men’s single was one of three Olympic qualification spots assigned to Norway. The lightweight men’s double and the men’s quadruple sculls picked up spots with the quad including rowing’s unstoppable Olaf Tufte. The 43-year-old is now one step closer to Olympics number seven.

The para PR1 men’s single sculls was won by Ukraine’s Roman Polianskyi. The Paralympic Champion was pressed hard by Chuvashev of Russia and reigning World Champion Erik Horrie of Australia. The win for Polianskyi saw him set a new World Best Time.