What may or may not turn out to be the swansong of the Kia Super League brought some high quality cricket to Hove for Finals Day.

For a pleasant change the runaway winners of the league stages, Western Storm, carried off the Big Prize in front of a big crowd and the television cameras. 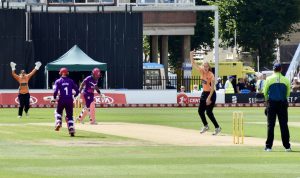 In the play-off for the right to play Storm, Southern Vipers took on Loughborough Lightning at a midday start. Lightning’s batting hasn’t been the stablest this summer, and once Lauren Bell had removed both openers, Amy Jones (off-stump uprooted) and Chamari Atapattu (lbw) inside six overs (4-0-23-2), it was up to the middle order to give the innings real substance.

Although the two Georgias, Elwiss and Adams, Mignon de Preez and Abi Freeborn advanced the total at more than a run-a-ball, none of them lasted long enough to cause concern to Vipers’ sceptics.

As has happened so many times this year, the lower order subsided too fast for comfort – from 118-4 to 143 all out. 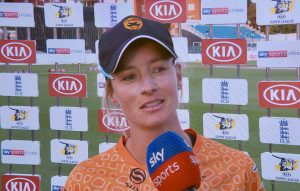 Vipers began their innings the way Lightning had started theirs. Danni Wyatt’s opening square-cut was a sumptuous stroke. She continued her glorious spell of top form, creaming the ball to all parts and sending the scoreboard into fast-forward. Bates joined in the fun. By the time Kirstie Gordon bowled her with a beauty (37), the total had reached 76 in a mere six-and-a-half overs.

What followed was again typical of the tournament: Wyatt followed in quick succession; Maia Bouchier suffered the first of two run-outs on the day; (the second one, quite unnecessary, helped to tilt the result); skipper Tammy Beaumont once more promised more than she could deliver (24 off 19) and tensions rose at 109-4.

Fortunately for Vipers Amanda-Jade Wellington and Paige Scholfield batted extremely well to see them through to victory by 5 wickets. So it was a second unhappy tilt at the trophy in two years for Lightning. 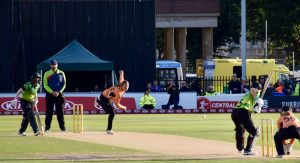 Last year the top-ranked side, Lightning lost the final game of the tournament. Would the same happen this year to Storm who had been beaten only once, in a much-reduced knockabout last week?

Vipers batted first, knowing they would need a proper score to have a chance of confounding Storm’s outstanding batting line-up.

Bates and Wyatt repeated their feats of the earlier game. It took a remarkable caught and bowled by Sonia Odedra to halt the New Zealander. She skied the ball back towards mid-off. Odedra had to halt in her tracks then go into reverse. She dived to her left and caught the ball left-handed just before it disappeared into the underworld.

The pair had put on 65 in six-and-a-half overs. Difficult for a fielding side to maintain its self-belief under such pressure.

After Beaumont’s dismissal the remaining batters did well to add 34 in under five overs. Carla Rudd had the doubtful pleasure of facing her only delivery, the last of the innings. What shot should she attempt? Her father predicted: ‘The ramp’. And lo and behold, she played the ramp for four! 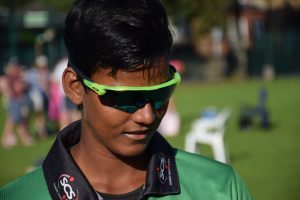 Of the Vipers bowlers only Farrant returned decent figures (3-0-19-2). Bell couldn’t repeat her heroics of the first game, and all the others suffered, mainly at the hands of England’s captain. She has a quiet confidence about her game these days that is quite admirable. She hit nine 4s and three 6s in a knock of 78* that was the main ingredient in Storm’s victory by 6 wickets. 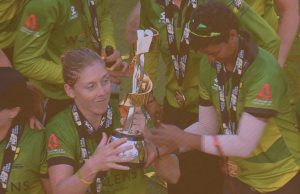 Crucial too was the part played by Deepti Sharma who struck 39* off 22 balls including seven sweetly struck 4s. The pair added 71 in six-and-a-half overs.
This time round, Bates couldn’t repeat her heroics in the last over. She did bowl two splendid yorkers, but three other balls finished in the crowd, sending the Storm support-cast wild with delight.

The quality of Storm’s batting, visible throughout the series, was demonstrated again, allowing them to become the only side to gain the trophy twice in its four-year reign.