All the great names (Dow, Perry, Beckett, Botterman, Tuima, Attwood, Galligan, Harrison) had disappeared from the Under 20 roster – upstairs, to the elite squad. And still the new-look squad put ten tries on a hard-pressed USA side. 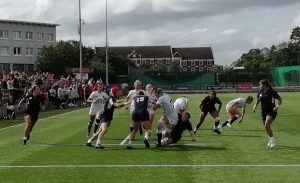 Just as though it was a cricket match, a torrential downpour hit the ground minutes before kick-off. Amelia Harper, honoured with the captaincy of the home side, led her troops out on to a soaked pitch.

No surprise that it took both teams a while to settle. But the warning signs were there from the start. The first scrum saw the English pack nudge their opponents back. The longer the game went on, the more marked this superiority became.

Ten minutes in, last year’s skipper, Phoebe Murray, scored by the posts; two minutes later, a quick turnover saw her feed her No 10, Lucie Skuse to canter over in space. England nearly had a third when they disrupted another American scrum and broke round the blind-side, but the score was ruled out.

Just before half-time two outstanding moves lit up the afternoon. First an attack that involved multiple passes of the slippery ball gave Cara Cox a score wide left. Then even more delightful, Skuse aimed a very deliberate short kick-pass into space on the right; Cara Clarke managed to field it cleanly, then set off on a mazy run that left three defenders grasping air.

It was so reminiscent of many similar efforts by Lydia Thompson that you must wonder whether tutor hadn’t passed on a few tips to pupil at Worcester Warriors. 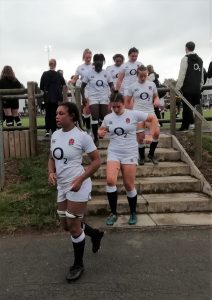 The second half produced six more tries to an ever-more dominant home side. Jo Yapp was able to bring the bench on with no visible diminution in pace, power or skill. Akina Gondwe, Clarke, Detysha Harper, Cox, Ebony Jefferies and Jess Cooksey all crossed the line by a variety of means, to give the final score-line a topsy-turvy look.

The young Eagles never for a moment gave up the chase. They must hope that they can raise their game sufficiently to give Canada a run for their money on Wednesday at the same venue.

One crucial area where the Americans were lacking was a sensible kicking game. With a bar of soap to deal with, the best option in defence was a well directed kick. Skuse provided them with an object lesson in this department. Her range of kicks was remarkable, including no fewer than six conversions.

Sarah Hunter was on hand to witness events. What might she have given for a few of the points she saw here when facing the Black Ferns last week!