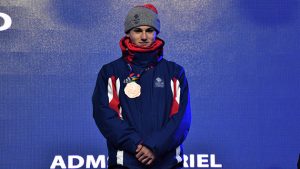 Adams, who turns 16 today, secured bronze in the men’s big air event, scoring 169.25 off his two best runs to ensure his place on the podium.

The under-16 World Rookie Tour number one scored 87.00 on his second run to put himself well within medal contention, before following it up with a run of 82.25 – just 15.00 points off gold.

Adams had finished sixth in Tuesday’s snowboard slopestyle competition and was delighted with his overall performance this week.

“I’m super excited to have won”, said Adams. “It was such a good experience. I just had to focus and get my run down as clean as I could and I managed to put down a pretty decent run that got me into third.

“I wasn’t expected to win like that – my mum and dad were so excited, my mum even cried a bit. It’s been wicked that they even came to watch – I can’t thank them enough.

“I couldn’t put a price on my overall experience – it’s been absolutely amazing. The Opening Ceremony was absolutely crazy with thirty-five thousand people cheering you on.

“Meeting people from all the different sports has been super cool and swapping pins with all the other countries has been fun. A lot of the other snowboarders I have already been friends with so it’s been great to see them again.”

While in the women’s big air, both Luca Lane-Hopkins and Lara Cabrera-Myram missed out on a place in the final, finishing in 14th and 21st positions.

Team GB’s mixed curling team, skipped by Hamish Gallacher, ensured they progressed to the semi-finals with a 100% record, after an 8-5 victory against Russia in the final game of the round robin.

Despite finding themselves 4-2 down at the halfway mark, the quartet recovered well bringing the score back to 5-4 after the fifth end. From this point, they maintained control of the match, securing their sixth straight victory at the close of the seventh end.

They will have the hammer in tomorrow’s semi-final against Poland, with the winner progressing into the gold medal match in the afternoon.

“We’ve had an absolute dream week so far – you can’t really fault how it’s gone”, said third Robyn Munro. “We’re looking to get another win in our next game, which would be amazing.

“It’s great to have the support from all the other sports, so hopefully they’ll be able to come out and watch once they’ve finished competing.”

It was the turn of Britain’s men’s alpine skiers to take on the giant slalom with Owen Vinter, Charles Rankin, Eduoard Guigonnet and Oliver Weeks on the start list.

Vinter and Rankin were the only Brits to complete both runs, finishing 20th and 35th respectively, with Guigonnet and Weeks recording DNF’s on the course.

In the figure skating, Derby’s Genevieve Sommerville skated to 23rd in the women’s free programme, while Joseph Zakipour finished 14th in the men’s section.

It was also the last day of competition for the two cross-country skiers, as they tackled the men’s sprint classic at the Igman mountain range.