Wasps maintain their 100% record in the Premier 15s Development League with a convincing 32-12 victory away at the previously undefeated Bristol Bears. 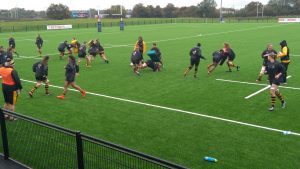 The visitors sealed the bonus point before half time, making the most of the opportunities that came their way. Stellar tackling from Wasps forced a number of turnovers in midfield which they quickly converted into a 22-7 lead at half-time. Despite the horribly cold and damp conditions, Wasps added two more tries in the second half and held Bristol inside their 22m for long periods.

A huge defensive effort for Wasps forced a number of turnovers to allow them to race into the lead. Anna Glyn Davies and Izzy Fisher converting turnovers into scores as Wasps began quickest of the two sides. 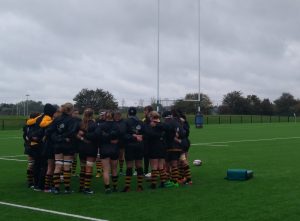 The bonus point was secured inside 25 minutes for Wasps. Maud Muir’s strong carrying created her fifth try in three games, before Makeda Lewis capped an excellent first half with the fourth try. Bristol got onto the board through Serena Settembri to reduce the deficit to 22-7 at half time.

Wasps controlled the majority of the second half, and continually applied pressure to Bristol but their defence held the visitors out for the opening period of the second half. An excellent combination between fly half Deirdre Roberts and centre Kendall Templeman finally broke the deadlock.

Excellent offloading in the tackle created space for Becca Wye who finished for the sixth and final try for the visitors. Bristol had the last score of the match after a long period of pressure inside the Wasps 22m with Serena Settembri crossing for her second of the day.

The victory means Wasps maintain their perfect start to the season with three wins out of three so far. They have also racked up an impressive 26 tries in the opening three rounds. They will face a tough test as they travel to Saracens next week in the hope of keeping momentum as the season progresses.