After the excitement of the spectacular Opening Ceremony it was down to business as Team GB competed across six sports on day one. 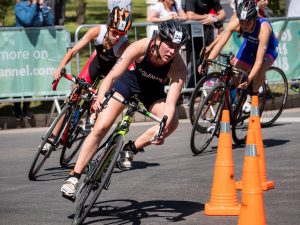 The first Team GB athlete to complete an event at Buenos Aires 2018 was triathlete Libby Coleman, who finished the women’s event in 23rd place.

Coleman, from Kirkby-in-Ashfield, was sitting in 13th place following the swim and safely in the main pack during the cycle leg of the sprint race.

The 17-year-old couldn’t bridge the gap to the leaders during the 5km run though and admitted her disappointment at the end of the race.

“It was a really tough race today with a lot of top girls in the field,” said Coleman. “It was first race in a world-class field and it just wasn’t my day but I can take away the great experience of the race but also being here at this event. 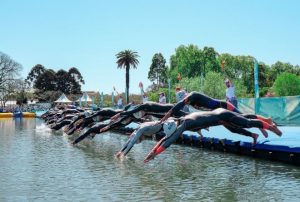 “Now I know what it like to be disappointed and I know I don’t want to be in this position again.”

In the BMX Racing Ross Cullen and Elissa Bradford were representing Team GB in the mixed team event. Two semi-finals of eight were split across three heats with the top four in each semi-final progressing to the final.

After a fourth place for Cullen, he followed up with two second places, securing his place in the boy’s final. Three fifth places for Bradford meant she missed out on the final.

Preston-born Cullen entered the final as one of the fancied riders, however, a slow start meant he found it difficult to recover and eventually finished in seventh.

“Sometimes the racing doesn’t go to plan but I was still happy with some of the laps I put in and pretty happy with my overall performance.

“I was feeling good going in to the final, the hot weather and the short rest didn’t help but I was still confident that I was capable but BMX can be such a savage sport and sometimes it just doesn’t go your way.”

The pair finished 10th overall, and Bradford was disappointed they couldn’t have had more. “I wish I could have ridden better. I was disappointed with how it went but that’s racing. There will definitely be things I want to work on after these Games.”

The duo completed in the 500m course in 3:19.03, 1.34 clear of the Argentina pair in second with the heats starting tomorrow. In the women’s single sculls, Georgina Robinson Ranger finished 10th fastest in her time trial in 4:01.25, 12.62 off local home favourite Maria Ordas.

Over at the Youth Olympic Park, Amelie Morgan and Adam Tobin both booked places in the artistic gymnastics finals on the first day of qualifications. Morgan qualified in fourth on the floor with 12.966, while Tobin will contest the men’s floor and pommel finals on Saturday.

Team GB’s acrobatic combination of Clyde Gembickas and Sophia Imrie-Gale safely progressed into their mixed pair final after coming through qualifying in sixth.

The Kent based pair negotiated their balance, dynamic and combined routines to finish with a total score of 80.960, just 1.110 behind qualification winners Israel. Gembickas and Imrie-Gale will bid for the medals on Monday 15th.