Mo Marley has named a 21-player squad for the FIFA Women’s U20 World Cup next month.

The Young Lionesses were drawn in Group B alongside Brazil, Mexico and holders North Korea for the tournament taking place in the Brittany region of France between 5 to 24 August. 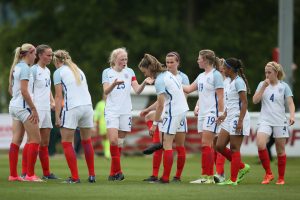 The group has vast experience throughout England’s youth teams and have participated in both UEFA U17 and U19 finals – with the added experience of reaching the quarter finals of the FIFA Women’s U17 World Cup in 2016.

England qualified for the tournament for a fifth time by beating Scotland in a play-off last August.

Zoe Cross and Mollie Rouse were on target that day and both are included in this summer’s squad.

The group travel to France on Thursday to fine-tune their preparations before opening up against North Korea on Sunday 5 August followed by Brazil on Wednesday 8 August and Mexico four days later.

Marley said: “The World Cup is a special tournament which is very hard to qualify for and only comes around every two years.

“Naming the squad has been so hard but I am privileged to work with such a talented group of players.

“We’ve had a number of training camps and the group have been very honest and very professional since qualification last August – you can sense a real excitement and determination ahead of the finals.

“At this level it’s about the best preparation, so you can express yourself and compete against the best players in the world.

“There is positive energy in the camp and we are all looking forward to getting out to France and building on the progress we have made recently.”