Sussex’s growing reputation as a centre of women’s cricket has received a further boost following the announcement that The 1st Central County Ground will again host some of the highest profile matches in the women’s game next summer. 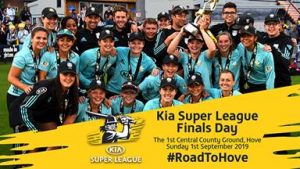 On the back of bumper crowds and electric atmospheres in 2017 and 2018, the home of Sussex Cricket has been selected to host Kia Super League Finals Day for a third consecutive season on Sunday 1st September 2019.

Earlier in the summer, Hove will play its part in the hotly anticipated Women’s Ashes series. The 1st Central County Ground will host England and newly-crowned world champions, Australia in a repeat of Saturday’s ICC World T20 final, in an international T20 on the afternoon of Sunday 28th July.

There will also be Kia Super League (KSL) group stage action on offer. Southern Vipers will again play one of their home matches at The 1st Central County Ground, with details announced tomorrow at 5pm when the full KSL fixture list is released.

“We’re very proud of the work we’ve done to make Hove a venue supporters associate with women’s cricket and we’re very grateful to have been given the chance to grow this reputation further next summer.

“As all cricket lovers know, it doesn’t get much bigger than an Ashes series. The last time we hosted England Women v Australia, the ground was sold out and we’d love for the same to happen next July.

“After the success of the last two editions, Kia Super League Finals Day is now associated with The 1st Central County Ground in much the same way as Edgbaston is linked with the men’s equivalent.

“It’s one of the best days in the cricketing calendar – men or women’s. The atmosphere is brilliant, and the crowds keep getting bigger.

“As well as providing fantastic spectacles in their own rights, we want these matches to inspire the next generation of cricketers and help contribute to a successful future for the game in Sussex and beyond.”

Tickets for all three women’s matches at The 1st Central County Ground in 2019 will go on sale on Friday February 1st 2019.

Women’s matches at The 1st Central County Ground in 2019